September is a fiery month –  in the Roman calendar, it is the seventh month and is also dedicated to Vulcan, Roman god of Fire.

Vulcan is the son of Jupiter and Juno, but legend has it that he was such an ugly baby – and was also born with a limp – that his mother first tried to push him off a cliff and then cast him into a volcano. Not the best start in life.

However, Vulcan turned out to be a dab hand at pyrotechnics and spent a blissful childhood splashing about in an underwater grotto with dolphins.

He grew up to be blacksmith to the gods themselves. It is said his forge was beneath Mount Etna in Sicily and he made the thrones for the gods on Mount Etna and also Mount Olympus.

Vulcan’s lack of film star looks also did not put off Venus – goddess of beauty and love – from marrying him.

Within the Roman Forum is a sanctuary dedicated to Vulcan, known as the Vulcanal (or Volcanale in Italian). It is thought to have been built by Titus Tatius and dates from the 8th century BC, when Rome was ruled as the Roman Kingdom (753 BC- 509 BC) before the Roman Republic was set up.

The Vulcanal therefore pre-dates the Forum and was originally built as an altar near Capitoline Hill. During Roman times, it is thought that the Vulcanal was used as a platform for making speeches from.

It was built well away from houses because of the Roman god’s association with fire – and it is thought people prayed to Vulcan to try and prevent fire. Ancient Romans believed in a whole raft of different gods, including household gods called the Penates – prayers were offered up to each god, depending on what people were hoping for.

The Vulcanal was only discovered in the Forum in 1899 and is now covered by a flat roof.

The remains of the Vulcanal are sited just by Severus’ Arch – one of the most spectacular structures remaining in the Forum, dedicated to the Roman Emperor Septimius Severus to commemorate his Parthian conquests. It was built in 203AD from white marble and is richly decorated.

The Forum itself underlines the fact that Rome was not built in a day, but was a work in progress over many centuries – and luckily for anyone who visits Rome, it is still here for us to enjoy today. 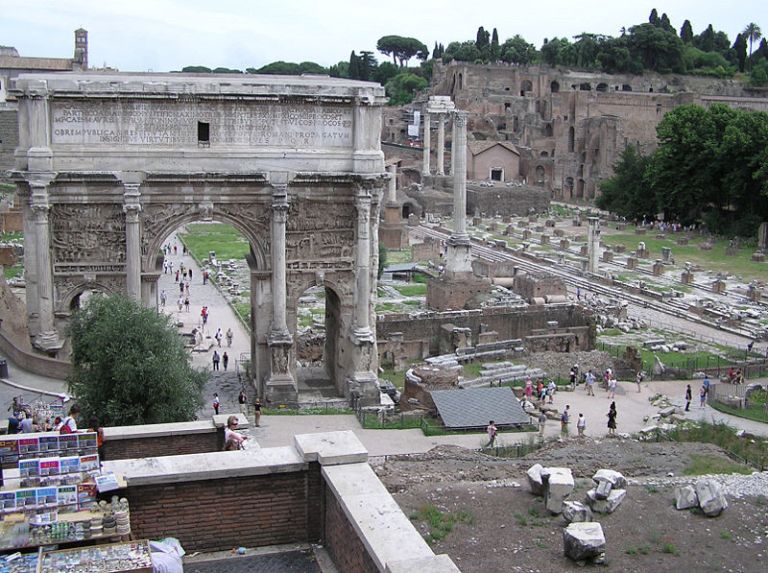 Read more about the Vulcanal online

September and October are perfect for visiting Rome – the temperature can still reach nearly 80F (26-27C) in late October – but it is cooler at night.  The Forum, the Colosseum and Trajan’s Market are also illuminated at night – and a stroll along the Via dei Fori Imperali in the evening is rather pleasant, as the crowds have dispersed.

Can’t get to Rome this autumn?

Download ROME ALONE and ROME AGAIN free at Amazon Kindle Unlimited or for £2.40 – and set off to the Eternal City for a a weekend of surprises, as unhappy housewife Bee and newly-divorced Alzheimer’s expert Dr Neil McCarthy leave from opposite ends of the country for a mini-break full of the unexpected that will change their lives forever. Return to Rome with them three years later and discover the forces at work which they never suspected on their first trip.

Coming soon – VERONA ALONE will be published later in 2017, followed by VERONA AGAIN in 2018.

Catch up on the story now – and get ready for some Christmas reading. Watch out for free downloads!

One thought on “September – dedicated to Vulcan, Roman god of Fire”