The Spanish Steps are one of the most famous landmarks in Rome – and often the first place tourists head to when they arrive, just to relax in the sun and sample some dolce vita.

The Spanish Steps were constructed in the 18th century as a route to link the Piazza di Spagna to the Trinità dei Monte church and piazza (square) above. The architect was Francesco di Santis, who won a competition to design and construct the stairway.

The steps were called the Spanish Steps because the Spanish Embassy to the Holy See was based in the area.

The area has always been a magnet for tourists – even in the days when the poet Keats arrived in Rome in November 1820, in the hope the warm climate would help cure him of TB.

At that time, the Piazza di Spagna – Spanish square – was a hub for new arrivals and acted as a port of entry for those freshly disembarked from ships and carriages. The house Keats rented -after being invited to stay by the poet Shelley and his wife Mary – is at the foot of the Spanish Steps.

Keats spent the last few months of his life gazing out of his window onto the Piazza di Spagna – he died on 23 February 1821 at the age of 25.

It is said he was particularly fond of the Fontana di Barcaccia by Bernini in the square below – a small fountain shaped like a sinking boat. The design is reputedly based on a story that in the 16th century, a small boat was washed up at the exact spot where the fountain now is, after the River Tiber flooded.

These days the fountain is a meeting place for tourists to enjoy the sun, throw coins into the fountain and eat gelati – day and night.

The roads leading off the piazza are also home to many of the world’s most famous designer shops – and you will find stores like Pucci and Chanel dotted around the Piazza di Spagna itself.

No trip to Rome is complete without tea in Babington’s – or a hearty breakfast of omelette and a pot of tea. There is a huge selection of teas to choose from and a pot of tea costs around 10 euros. Royal Blend is highly recommended at any time of day – when in Rome, you might as well live like an emperor.

The Spanish Steps are also very near the Via Vittorio Veneto – home of la dolce vita. After feasting at Babington’s or sunning yourself by the fountain, walk up the Spanish Steps, turn right down the Via Sistina and take a left turn to the Via Veneto for a gentle stroll down the elegant, tree-lined street to the Trevi Fountain. 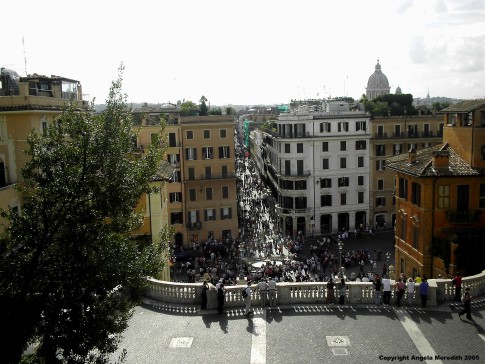 At the top of the Spanish Steps 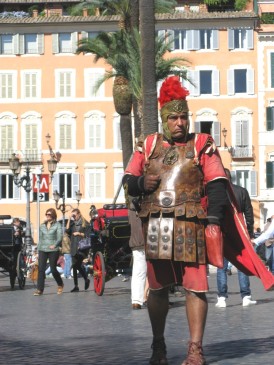 Gladiator on the loose in Piazza di Spagna 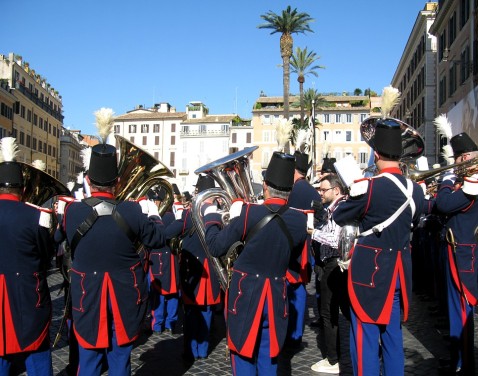 Keats-Shelley House at the Spanish Steps 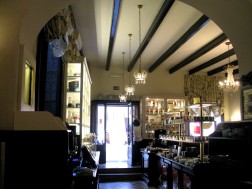 Want to go to Rome now? Download ROME ALONE and ROME AGAIN free at Amazon Unlimited or for £2.40 – and set off to the Eternal City for a a weekend of adventures, as unhappy housewife Bee and newly-divorced Alzheimer’s expert Dr Neil McCarthy leave from opposite ends of the country for a mini-break full of the unexpected that will change their lives forever. Return to Rome with them three years later and discover the forces at work which they never suspected on their first trip.