As a tourist, it is almost impossible to starve in Rome – even if you are not carrying a wad of euros, there are bars and trattoria on nearly every street, meaning you can have a snack or a meal whenever your heart, stomach and pocket desire.

Sometimes, though – after a long slog round the ancient sites and some profligate shopping – you suddenly find it is 9pm, when restaurants may start packing up out of season, and you haven’t yet eaten. You may be alone and festooned with carrier bags (guilty), or your other half and the kids may be rebellious beyond belief as their empty stomachs cave in with hunger. This is when you are likely to head for the nearest viable ristorante.

In the interests of science, I went sightseeing and then shopping, all for you – and dined out at three eateries in central Rome that any weary tourist might collapse into. Let’s go – it’s time to eat.

Trinità de’ Monti Ristorante lies at the top of the Spanish Steps and is often tucked behind a row of Vespas, the odd small car and sometimes a police car. It has won an award as a Recommended Business 2017 and is across the piazza from the Hassler Hotel – very smart – and as such, is rather elegant and imposing. The restaurant attracts tourists, families and more well-heeled clientele, which, unfortunately, it did not get the night I turned up at 9pm in the rain: a damp shambles of a woman with too many shopping bags and a Moschino raincoat working hard to fight off the rain. Women dining solo in Italy can sometimes be awkward – not for me, but for waiters and other diners who wonder what you have done with your husband.  However, let’s not go into that on our first dinner date together.  The service at the restaurant is impeccably polished once they have got over the shock of a woman sitting alone outside their premises, her shopping keeping her company in the next chair. The menu is impressive if you are looking for a sophisticated dinner. I ordered Beef Ravioli with Rosemary Sauce and a glass of orange juice. The fact I do not drink is always a disappointment to catering establishments, but we overcame it.  By the time the ravioli arrived, I had eaten nearly the entire contents of the bread basket and very nearly the basket itself.  The ravioli was delicious – delicate pasta parcels filled with the lightest beef filling that was almost mousse-like in its consistency. The rosemary sauce was light and very girly. I crammed the whole lot into my mouth as fast as possible, while a hungry seagull lurked nearby and eventually strolled down the street to attack a binbag on the other side of the road.  The orange juice was freshly squeezed.  As it was by now cold and starting to rain heavily, I forewent coffee.

Total bill: €28 plus €4 tip. I was heartened to see the following evening a solo woman sitting in exactly the same seat I had sat in. Come on, girls, we can do this – we can dine out alone in Rome.

Would I return? Si si si 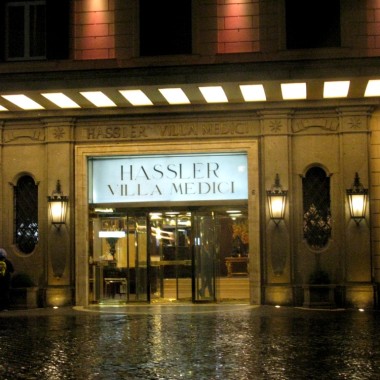 Antica Roma is on the via Propaganda and is the sort of bar/ristorante that any weary tourist might collapse into for supper, with bright and inviting pavement tables and chairs down a side street. This time it wasn’t raining, but was chilly and I was festooned with shopping again. I sat under a patio heater and again in the interests of science, ordered pretty much the same meal – this time it was Ravioli with Ricotta and Spinach. Ordering a glass of orange juice was less easy, as I was told that in Rome they do not serve fresh orange juice, only Fanta. Being the great granddaughter of Julius Caesar, I wasn’t having this as an excuse and did the pointy finger at the menu, which resulted in a glass of freshly squeezed blood orange juice costing €8 (hashtag OMG, as the saying goes). Delicious it was, though. I did not have a bread basket to entertain me, but the ravioli soon arrived, sprinkled prettily with parsley. I had been rather spoiled with my high-end ravioli at the Trinità de’ Monti Ristorante the night before, but this was hot, tasty, al dente and plentiful.  I ate it in record time. I forewent a dessert and coffee in favour of an artisan ice cream in Piazza di Spagna on the way home.

Note: if you read the cover of the menu, you will see that after 10pm, there is a 20% SURCHARGE added to the prices.

Would I return? Si, but only before 10pm, obviously. 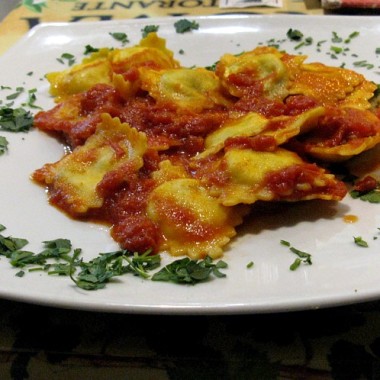 La Botte on the via Sistina (just a short slide down the hill from the Trinità dei Monti church) is the sort of pizzeria everyone hopes for on holiday in Italy. Again, I ordered Ravioli (spinach and ricotta) and a glass of freshly squeezed orange juice (widely available in Rome). La Botte is painted a bright orange colour, has a ceiling thick with wooden beams, with black and white Rat Pack photos on one wall glorifying the days of La Dolce Vita – and faux onions and vine leaves trailing above the tables and chairs. The Gypsy Kings play on the PA system for added atmosphere. Clientele ranges from locals, beard-y hipsters balancing babies on their laps, couples smooching across the table, tourists – and on this occasion, a woman dining alone. It bothered me not a jot – especially when my man-sized ravioli arrived drenched in sauce and the waiter left the parmesan shaker on the table for me to help myself. They know how to please a hungry woman at La Botte. This time, I had a caffe latte and watched the proprietor chatting and backslapping his many friends, who dropped by for what appeared to be takeaway orders.

Note: there are joints of roast meat residing on a chill counter by the door, so this is not a venue for nervous vegetarians.

Would I return? Si, si si 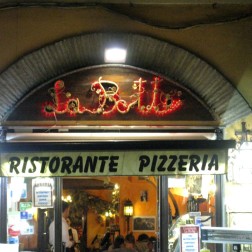 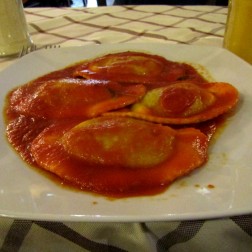 So what have we learnt about dining out in the tourist area of central Rome?

Check the menu for any surcharges, such as a supplement after a certain time

Check to see if service is included – often it is, but it is always nice to give a tip for good service

Try to eat early rather than collapse into a ristorante when you are too exhausted to care – that way it will most likely be tourist treat, not tourist trick. Buon appetito!