With Valentine’s Day approaching, if you have booked a romantic break to the Eternal City, you will need to know the most couple-friendly sites to visit.

Obviously the Trevi Fountain is first on the list – the place where newly married couples often have their wedding photos taken.

But Rome also has some of the most romantic artefacts in the world and for marrieds – or soon-to-be marrieds – a visit to Villa Giulia is essential.

Situated in the Parioli district on Via di Villa Giulia, the villa itself was built for Pope Julius III and houses the National Etruscan Museum, including one of the most romantic artworks in the city: The Sarcophagus of the Spouses (Sarcofago degli Sposi). 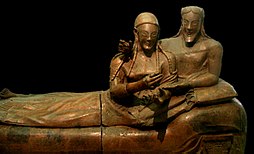 It might not seem very romantic to visit a sarcophagus on a Valentine break, but the late sixth century work is known for its touching depiction of marital love. It is thought to be one of the masterpieces of the Etruscan era, which ran the 8th century BC to the 3rd and 2nd centuries BC. The sarcophagus is made from terracotta – but once it would have been richly decorated with brightly coloured paint. Love may fade in this life – but obviously it never dies.

If you are visiting Paris this Valentine’s, there is also another Sarcophagus of the Spouses in the Louvre.

You can reach Villa Giulia by walking north from Piazza del Popolo – or take a romantic stroll hand-in-hand along the River Tiber and turn right into Via di Villa Giulia.

Need something romantic to do after visiting Villa Giulia? Stroll back to Piazza del Popolo and down Via del Babuino to Piazza di Spagna, where you will find Babingtons Tea Shop at the foot of the Spanish Steps. Frequented by some of the most romantic poets in the world – including Byron and Shelley – it is the perfect Valentine’s treat.