Such sad news to hear and see that Venice is flooded again. It is a city I have visited regularly in the last few years – sometimes just for a day, which is easy if you stay in Verona.

What you might not know is that St Mark’s Square floods at night even when there is not a high tide or a flood alert in place – it can be flooded up to around six inches (10cm) or more at night, which usually results in tourists splashing about and the restaurants around the piazza emptying, as tables and chairs are stranded in the flood waters.

However, even if there are no customers, the orchestras in St Mark’s Square always play on! It is not unusual, however, for the waters to become so deep when there isn’t a flood alert that the only way to get about is to use the chairs to climb to safety! The water in the Grand Canal is actually full of sewage, so splashing through the water is not quite as fun as it might seem.

Venetians are well organised and if the waters rise above a few inches, you will be able to buy plastic raincoats, waterproof footwear – and umbrellas if it is raining.

Even in the summer months, there might be rain and the waters will rise – I have visited in June to find myself splashing my way across St Mark’s Square. The waters create a curious visual effect, with the reflection of the buildings bordering the piazza making it look like a cruise liner docked in the square!

Piazza San Marco at night – some flooding is usual 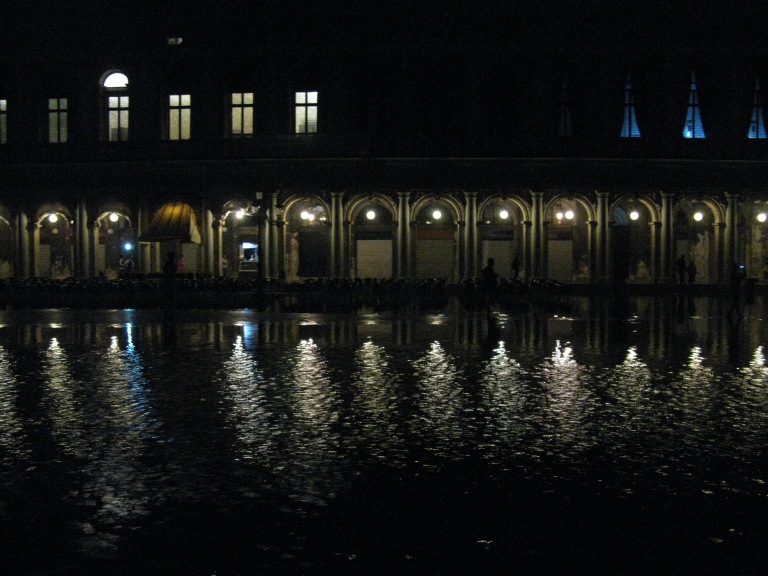 The city was built on a lagoon where there was only marshland – not the best foundation for a city. Venice is actually 118 islands and is known as La Serenissima. It was originally a refuge for those fleeing the persecution of the Germanic tribes who overtook the nearby cities of the Roman Empire. Venice became a Republic and one of the most important global trading centres, with the influence of different cultures visible in the architecture. 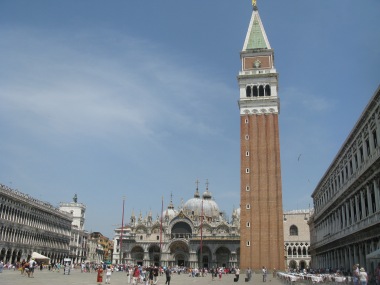 Venice is a unique place because of its history, its construction and its culture – as well as its place at the centre of global trading. It has always been predicted that one day the city would return to the lagoon – and the increase in visiting tourists and climate change have been blamed for the frequent flooding and erosion of the city.  Even in winter months, visitors flock to Venice, simply because in winter it has a special kind of magic and becomes even more ethereal and alluring, as mists close in and the buildings seem even more shrouded in mystery and intrigue.

Venice and the lagoon is a UNESCO World Heritage site – on everyone’s bucket list of Things To Do must be to race across the lagoon towards the city by boat and watch the familiar horizon emerge through the sea spray before your eyes. It is a thrilling and romantic experience! If you can organise a bottle of champagne and actually manage to drink some en route, even better!

Join other vessels in the exhilarating ride across the lagoon

It is important – and now crucial – to be responsible as tourists: in the height of summer, the quayside in Venice is flooded with tourists, not water; so much so that it is almost impossible to walk through the crowds.

In recent years, large cruise ships were banned from docking at San Marco, after several incidents of cruise ships crashing into the quayside when docking. 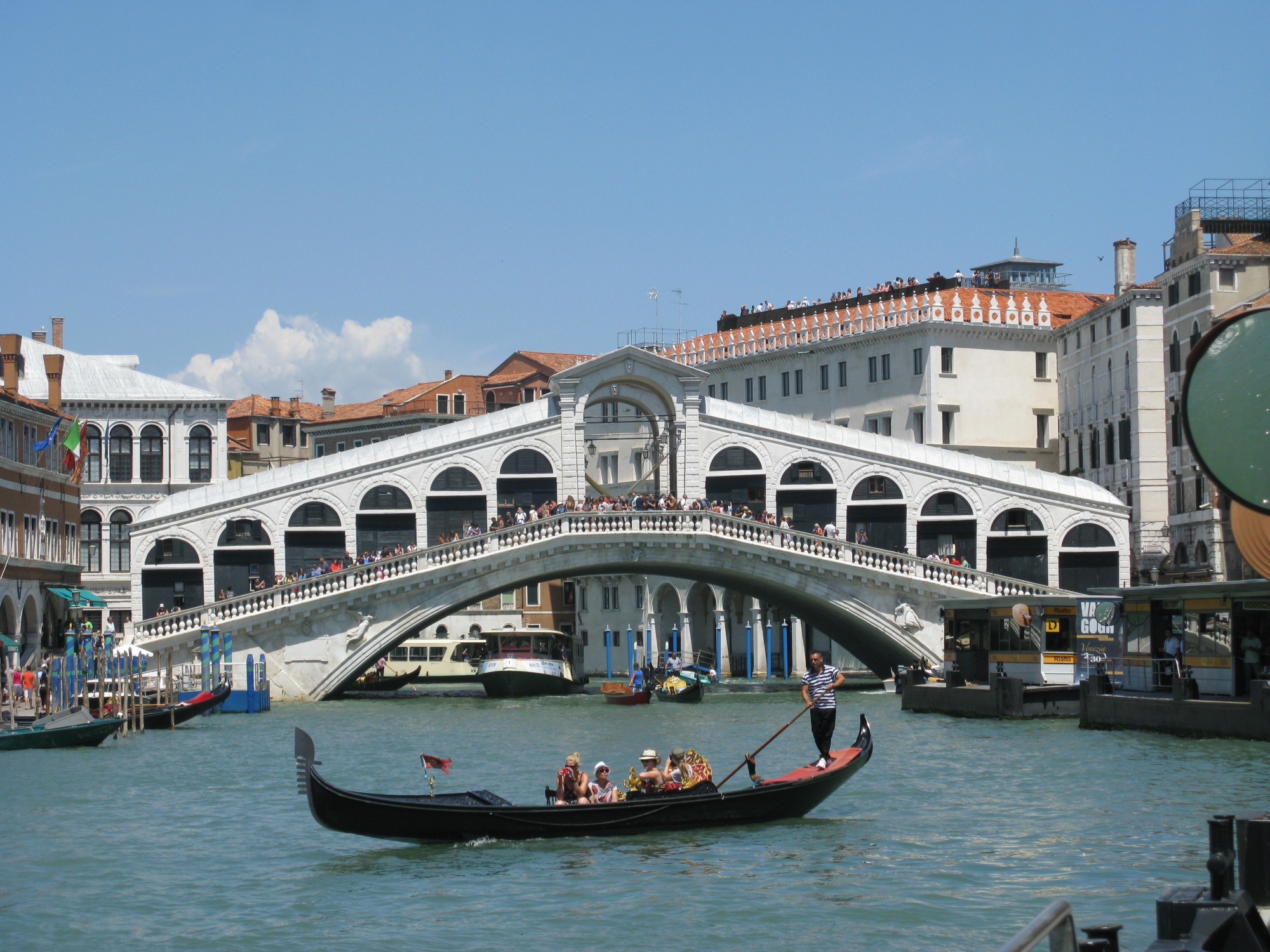 Planning a trip to Venice

It is easy to reach Venice by train from cities like Verona – and spending a day there can be as exciting as spending a week. The trains can be crowded, but at least it avoids thousands of tourists disembarking from cruise ships and swarming all over the city at once.  You might miss out on that exhilarating approach from the airport by boat – but you can always take a boat trip once there.

We are a long way off from commercial flights using rechargeable batteries or sustainable aviation fuel rather than kerosene, but while we wait for carbon-friendly aircraft to become feasible, approaching Venice in another way might be more responsible.

If you are thinking of visiting Venice – and who wouldn’t want to? – perhaps think of planning a trip that is shorter, but sweeter for the city itself; and use a mode of transport that is less gas guzzling, or choose a time of year that might be less popular. Early to mid-June tends to be quieter, I find. July to August is only for those who can bear extreme heat and crowds – and even then, six hours in Venice in the boiling heat and madding crowd will be more than enough.

The ferry leaves for Rialto directly outside the train station – and it is a glorious journey up the Grand Canal, with plenty of photo opportunities.  I always alight at Rialto rather than San Marco and walk through the narrow, winding streets to Piazza San Marco. Rialto is much closer to San Marco than the map suggests – you could walk there in around ten minutes from Rialto, unless you take advantage of the many shopping opportunities on the way or find yourself a gondola!

St Mark’s Square from the roof of the Basilica 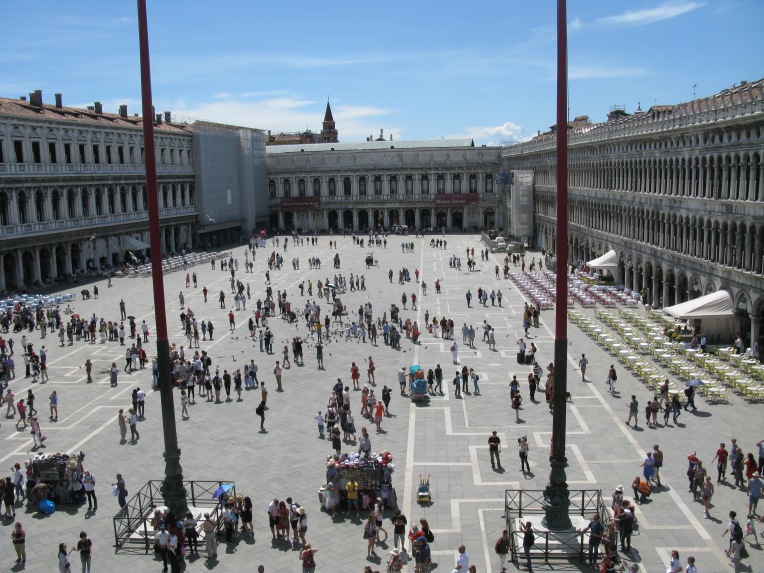 What to do on a Venice day trip

I recommend a light lunch at Florian – I usually spend around 32 euros for a brunch course, followed by a special Florian dessert, coffee and a cool drink. You get a perfect view of the piazza and the main architectural wonders like the Doge’s Palace and Basilica San Marco, all to the soundtrack of Florian’s orchestra.

Whether you enjoy the historical sites, wander along the prom in the sun, or enjoy a day’s shopping, Venice is a wonderful experience. There is no need to spend a lot of money, either, if you are on a budget – eat at pizzeria or sandwich bars, feed the pigeons, stroll hand-in-hand with the one you love, savour the romance of Venice, buy gelato and take selfies.

If a gondola ride is a must, it costs around 100 euros to hire a gondola with gondolier all to yourself – a shared gondola can hold five or six people, so is a cheaper, if less romantic, option. Singing gondoliers are extra!  You will often see hats by the gondola piers for leaving a tip for your gondolier. 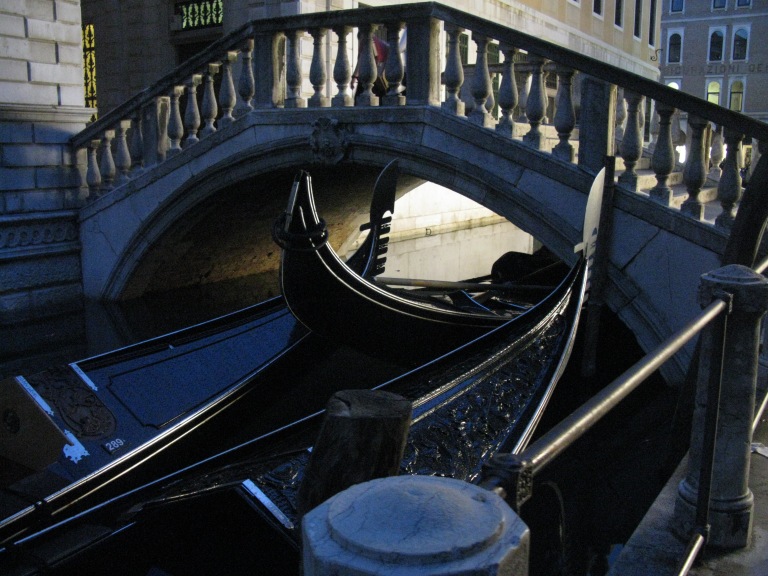 Have a wonderful time in Venice, but take care of La Serenissimafor future generations to enjoy.

Download VERONA ALONE and VERONA AGAIN and set off with newly divorced Moira as she enjoys her first holiday as a single woman by visiting Verona during the summer opera season. There she meets a quirky and generous American, who appears to have a secret, which she only discovers when she finds herself all at sea with him and in hot water.

Return to Verona with Moira a year later, when she makes a sentimental journey and prays for a miracle.

Download VERONA ALONE and VERONA AGAIN free at Kindle Unlimited or for just £2.60 each.

Want to go to Rome?

Read the prequels ROME ALONE and ROME AGAIN, when unhappy housewife and mother Bee and newly divorced Alzheimer’s researcher Dr Neil McCarthy each set off for a weekend mini break in the Eternal City and find their lives changed forever.

Return with them three years later and discover the forces at work which they did not suspect on their first trip.