Milan used to be the capital of the Western Roman Empire – and is considered one of the most important global business centres for finance, fashion (of course!), the Arts, tourism and research, among other sectors. It is the home of Italy’s Stock Exchange, rather than the Italian capital, Rome – and is one of the world’s four fashion capitals, along with London, Paris and New York.

Milan is a great sprawl – with Greater Milan having more than 8 million residents and the City of Milan having nearly 1.5 million. It is an urban powerhouse – and arriving in Milan from the airport you will notice how urbanised it is, with the skyline slowly being filled with the sort of architecture you find in New York, London and Singapore. Milan is reconfiguring its ancient skyline – now from any vantage point you take a photo, there undoubtedly will be a towering skyscraper photobombing the ancient architecture, or several! 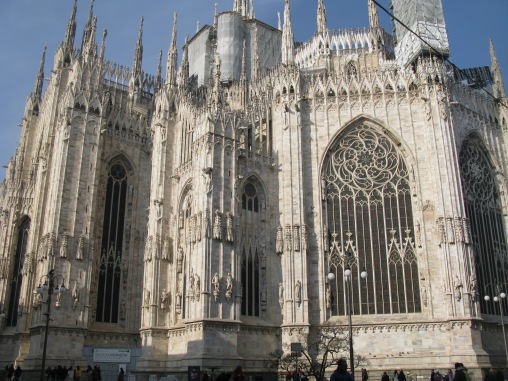 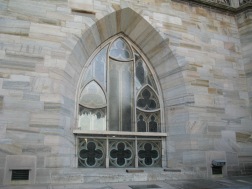 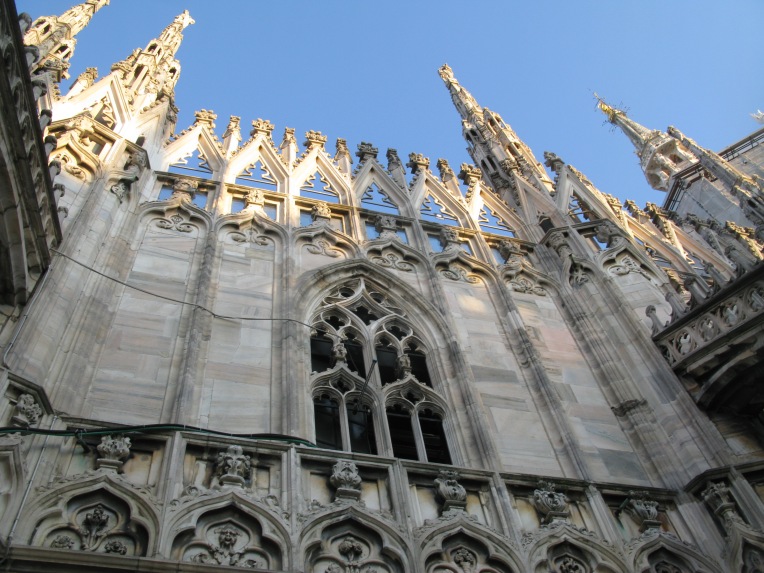 But there is a pearl at the heart of this urban sprawl in the shape of Piazza del Duomo and its surroundings. It is possible to take in the main sites of Milan in just a weekend – any more might be too exhausting, as you have to leave time for relaxing in a cafe and taking in the passing crowds.

The sightseeing must-dos in Milan are:

The Duomo and Duomo rooftop

You will need more than a weekend to break the back of Milan’s art galleries and museums, so start with the basics and take time to explore Milan’s streets rather than race around. 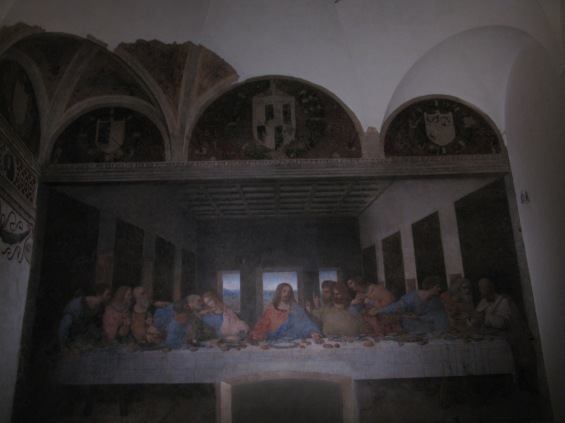 If you like walking, as I do, it is an interesting city to wander around, although very much a working city, rather than a sightseeing experience as Rome is.  Milan has a canal system and it is very pleasant to stroll along the canal and stop for supper at one of the many restaurants and bars.

Metro and trams and buses and taxis are plentiful.  There are many companies offering travel deals and apps – I tried the widely promoted Milanocard, and would not recommend it, as it is not an app as advertised because the travel aspect is a paper travel card you have to collect on arrival at Terminal One of Milan Airport or Piazza del Duomo – and even then it did not work. However, you can buy travel cards at Milan Public Transport.

Charter flights like EasyJet arrival at Terminal Two of Milan Airport which is some distance away from Terminal One, the schedule flight terminal. There is a shuttle bus between the two. There is also an airport transfer bus to Milan Central Station, or you can catch a train from Terminal One – Terminal Two is, frankly, on arrival, a bit of an outpost, but if you like WWII re-enactment, some of the buildings and barbed wire fencing will set your pulse racing. It is not the glamorous arrival in Milan you might have anticipated!

Official taxis in Milan are white, although there are plenty of Uber touts. A taxi from Central Station to Piazza del Duomo costs about 10-12 euros – a taxi from Piazza Scala to Santa Maria Delle Grazie to see The Last Supper costs about the same amount. Airport transfer by taxi to Malpensa is around 80 euros.

Central Milan is full of retail joy, whether you love designer brands (head for Galleria Vittorio Emanuele II) or high street like Zara, Nike, Carpisa bags, or Flying Tiger – or independent boutiques where you can find the sort of pieces that make your friends green with envy. Think merino wool and cashmere sweaters and dresses, beautiful skirts, those essential LBDs and coats. Stay around Piazza del Duomo if you are short on time – or take a wander round the streets and discover independent stores. After visiting The Last Supper, I took stroll along Via Vincenzo Monti and discovered some lovely independent stores and eateries.  The Quadrilatero d’Oro shopping centre is a famous cobbled quadrangle of designer stores perfect for window shopping and soaking up the glamour of Milan fashion. There are also lots of bookshops in Milan, including a fabulous bookshop in Galleria Vittorio Emanuele II, with bargain art books on sale.

You will not starve in Milan – Piazza del Duomo boasts a McDonalds if you really must, but Galleria Vittorio Emanuele II has some convenient traditional restaurants and tearooms, but they are often busy. I collapsed exhausted into Galleria restaurant for dinner and was well fed for 40 euros without wine. Stop by the cafe and restaurant at Teatro all Scala (“La Scala”) for a coffee and cake pitstop or sandwich and aperitif. Sit outside to watch the crowds go by – or head inside to lounge on a scarlet velvet banquette surrounded by gilt-framed mirrors. Otherwise, there are restaurants and trattoria of all shapes and sizes all over Milan – as well as smart bars and traditional eateries. Milan has an Alpine feel to it at times and there are restaurants that will make you feel you have travelled three hours over the border and arrived in Switzerland.  There is also a fabulously atmospheric Fin de siècle cafe in Palazzo Reale called Giacomo Caffe, which is perfect for a light lunch, coffee break or beer. It is wonderfully atmospheric and bustling and really takes you back to another era. I love it, but you will undoubtedly find your own special places to wine and dine on your travels round Milan. Piazza del Duomo also has a selection of bars above Galleria Vittorio Emanuele II, with views over the square and the Duomo, including Comparino in Galleria – and Terraza Aperol, which you will hear before you see thanks to a pumping sound system. 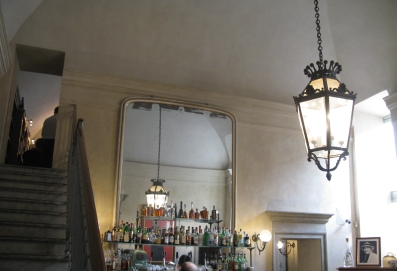 Milan – when to go

Visit Milan all year round – January is usually cold but sunny with occasional rain, summer is scorching. It is a great centre for travelling from, with trains to Rome, Florence, Verona, Venice, Bologna and other Italian cities from around 20 euros one way. You can also travel to Switzerland from Milan – as well as Paris, Nice, Cannes and London, among many other destinations. I visit Italy regularly and travel by train – Trenitalia trains are functional rather than luxurious, but they are cheap and efficient and laugh in the face of bad weather, unlike UK trains, so visiting and travelling round Italy and farther afield is viable at any time of year. See where you can travel to from Milan at Seat61.com.

If you have mobility issues, staying round Piazza del Duomo is convenient – Italy is full of cobbled streets, but although the square is cobbled, Galleria Vittorio Emanuele II is fabulously tiled and easy on the feet and wheels.  There are also lots of eateries and shops to peruse in the covered arcade around the piazza – and the Duomo and La Scala are within easy travelling distance, as well as the high street shops and Museo Palazzo Reale.  That itinerary alone should be enough to keep you busy for the weekend!

One thought on “Visit Milan”