Julius Caesar was born on 13 July 100BC, making today his 2,120th birthday. The famous Roman emperor was born by Caesarian section – and recently researchers have suggested that the procedure might have contributed to him having an enlarged cranium.

We are all acquainted with the dour-faced marble busts of Julius Caesar, but now researchers at the National Museum of Antiquities, Leiden in the Netherlands have used the latest facial reconstruction technology to create a lifelike image of the most famous Roman Emperor in the world. 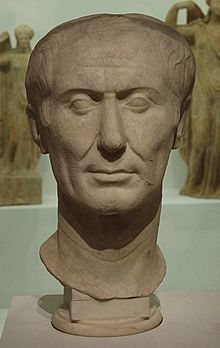 Julius Caesar gives his name to the Caesarean procedure used during more complex deliveries to ensure a baby is born quickly without injury or distress. As a result of the procedure, the great ruler was born with an enlarged cranium.

Although he is not known to have fathered any surviving children, his looks did not detract female admirers and he was married three times and was famously the lover of the Egyptian ruler Cleopatra VII, with whom he fathered a son, Ptolemy Philopator Philometor Caesar (Caesarion).

Using existing busts of Julius Caesar and 3D technology, archaeologist and anthropologist Maja d’Hollosy has created a lifelike image of what Caesar would have looked like in the flesh, including his large cranium and almost pinched features, perhaps as a result of his skull deformity. Images of his great nephew and successor Augustus, show a marked family resemblance, however.

After Caesar’s murder in 44BC, Augustus built a temple in his memory in the Forum. All that is left of it is a humble mound where the altar was, where people leave offerings.

All hail Caesar and happy birthday!