If ever an altar of peace were needed, it is now. However, on 4 July 13 BC, the Roman senate beat us to it and commissioned the Ara Pacis Augustae dedicated to Pax, goddess of peace.

The Ara Pacis, as it is generally known, was commissioned to celebrate Emperor Augustus returning to Rome after his famous campaigns in France and Spain – known to the Ancient Romans as Gaul and Hispania. The construction of the Ara Pacis was intended to mark a long period of peace in the world.

The altar used to sit at the north east edge of the Campus Martius, which was a flood plain. Silt deposits from the River Tiber eventually buried the altar – but in 1938, one year before the outbreak of WWII, the altar was moved to its current location. It is now housed in a specially constructed museum with a glass front to protect it from the elements, while the traffic from the Lungotevere races past. The small museum is one of several buildings the Museo Nazionale Romano has across Rome.

The Ara Pacis is also next door to the Temple of Augustus – which can be seen through the museum’s expansive window – so it is handy to visit them both in a morning or afternoon.

(If you are making your way from Piazza di Spagna along Via Dei Condotti, you can also take in Caffe Greco, Fendi and the VAT refund bureau along the way. Bonus.)

The altar itself is housed in a richly decorated marble construction which was open to the elements. Originally the marble would have been painted in bright colours rather than being the pristine white edifice that exists today. There is an impressive flight of stairs leading into the altar room, perfect for processing. The classical decoration on the interior and exterior walls reflects the laws which governed altar rituals in Ancient Rome – called the lex aria.

You will see fruit and vines running along the walls – and the skulls of oxen.  Fruit and vines convey the idea of the plentiful harvest and fertility – images of cattle are frequently used in mythology and belief systems, such as the cult of Mithras. The bull is a virile and powerful beast that is used in sacrificial rites.

Fruit and vines are also commonly used to represent abundance or the harvest – and in an altar dedicated to a great emperor and his military campaigns, they suggest that he is not only a great general, but a great provider whose reign brings abundance and prosperity to his people, as well as peace.

Fertility in nature is also often linked to human fertility  – and using animal images such as the lion or the bull to denote power and even virility in a leader is also common.

The imagery of the Ara Pacis therefore works at different levels in its celebration of the Emperor Augustus and his achievements, including the peace he brought to his empire.

The power of the emperor is also suggested in the exterior decoration, which shows scenes of nature – and figures who wear laurel wreaths on their heads to reflect the victories of the emperor which the altar is celebrating.

The figure of Rome (Roma) is there, too – a female bearing a helmet with one breast exposed, holding a sword in its decorated scabbard. She resembles the later image of Britannia and might have been used as the model for this – Britain was an important Roman colony.

There is also on the exterior walls of the altar building an image of the imperial family processing. Scholars often dispute the who’s who of the Ara Pacis – but you do not have to burn the midnight oil studying all the iconography to enjoy the beauty of the altar. It is rare to be able to enter an Ancient Roman altar – the one in the Forum dedicated to Julius Caesar by Augustus after his murder is little more than a shed now – so take this chance to get up close to history. 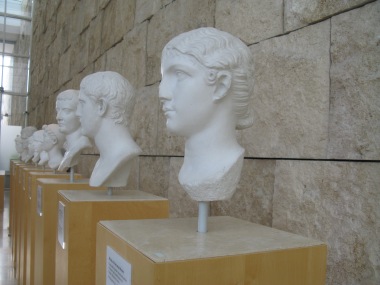 Before you climb the stairs to the altar, you can also marvel at busts of the emperors lined up for your inspection!

There are interactive displays explaining the significance, architecture and imagery of the altar – and there is also a lecture theatre and a gift shop full of books and souvenirs. If it is a hot day, collapse by the fountain outside and relax.

And – most important – the WCs are in the basement at the far end of the museum behind the altar.

The Ara Pacis is also convenient to visit if you are planning to see the Vatican or Castel Sant’Angelo – it is located just across the Tiber from Ponte Umberto. Look on the map for Museo Nazionale Romano where the Ara Pacis is housed.

There are some excellent images of the Ara Pacis on the website Italian Ways.

All images copyright A. Meredith 2019