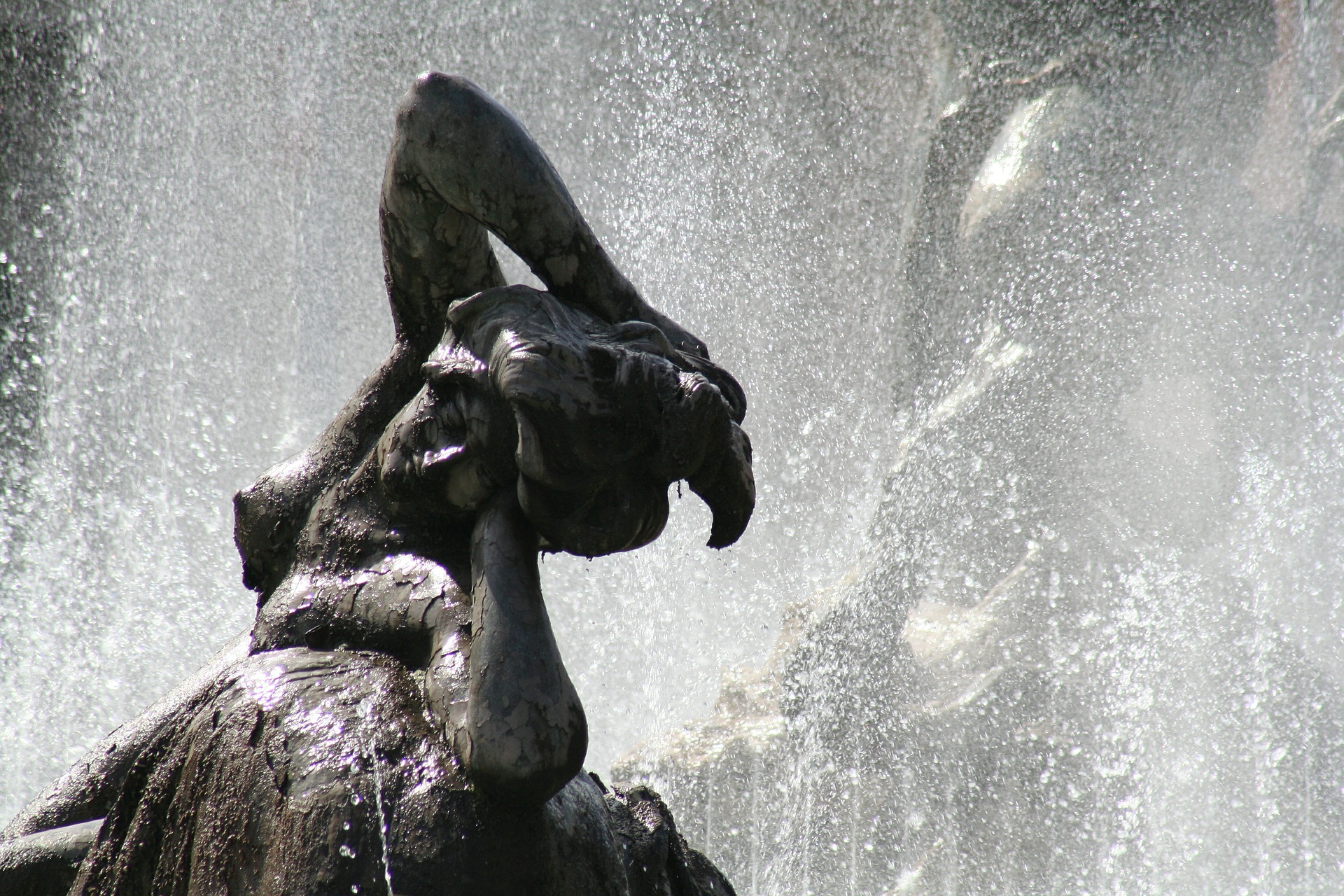 July in Ancient Rome was not the July we know and love. The Roman calendar originally consisted of ten months and began in March – because of this, July was originally known as Quintilis.

The first king of Rome, Romulus – of Romulus and Remus fame – is thought to have devised the first Roman calendar.  The calendar had six months lasting for 30 days and four months of 31 days.

So the original Roman calendar was:

After Caesar’s murder on 15 March 44BC, July – the month of Caesar’s birth (13 July) was renamed from Quintilis to honour him. His reformation of the Roman calendar became known as the Julian calendar.

Sextilis was renamed August in 8BC to honour Emperor Augustus – real name Octavian – who was Caesar’s great nephew and whom Caesar had named as his successor, not having a surviving son himself.

Today, July in Rome is a time for music festivals, which take place at all the main historical sites – including the Colosseum, which has a stage built across one end of the vast amphitheatre floor.

The Baths of Caracalla host opera among its dramatic architecture – and there is a summer  concert programme called Rock in Roma, which attracts global superstars like the Rolling Stones, as well as homegrown Italian superstars.

There are also religious festivals like the Feast of Santa Maria del Carmine at the end of July – and street festivals, with stalls and handicrafts spread along the banks of the Tiber.

July is a peak time for tourists to visit Rome – it is also one of the hottest months of the year in the Eternal City and temperatures can top 100F.

An important thing to remember if you are visiting in July – and are feeling the heat – is that it is illegal to bathe in the fountains and it is now also illegal to sit on the Spanish Steps.

Cooling down in Rome’s heat

When things get hot in the Eternal City, I recommend heading to the Museum of Ara Pacis, which is handily situated across from Castel Sant’ Angelo on the Lungotevere, where one of the larger street festivals also takes place, with stalls set out along the busy street.

Ara Pacis is a lovely, calm, cool museum with a small fountain outside where you can sit, so you can either take refuge inside (entry 10 euros) or sit by the fountain and rest, which you cannot now do by the Trevi Fountain. 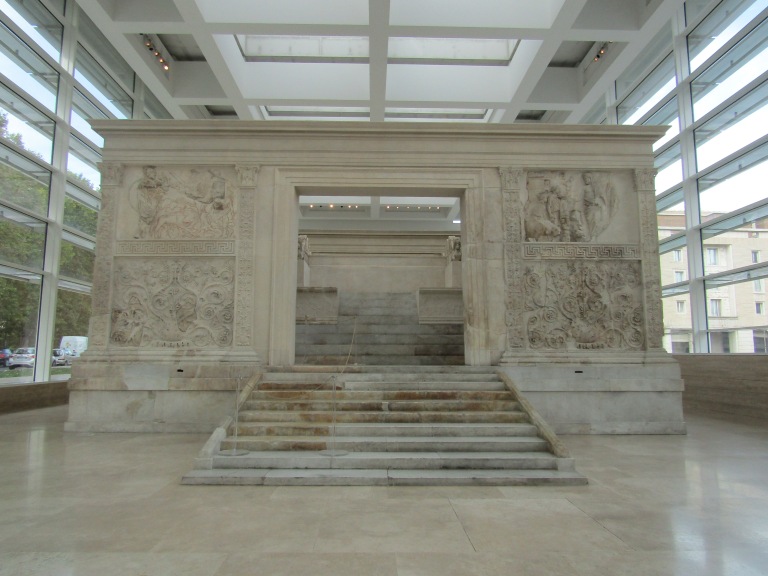 Marching on your stomach in Rome

Don’t forget to take plenty of sunscreen and drink plenty of water – I love Liptons chilled peach tea, which you can buy from the street vendors and which is a great sugar boost if you are feeling weary.  You can also buy panini, cakes and gelato from vendors, which are dotted around all over Rome and near the main tourist sites. 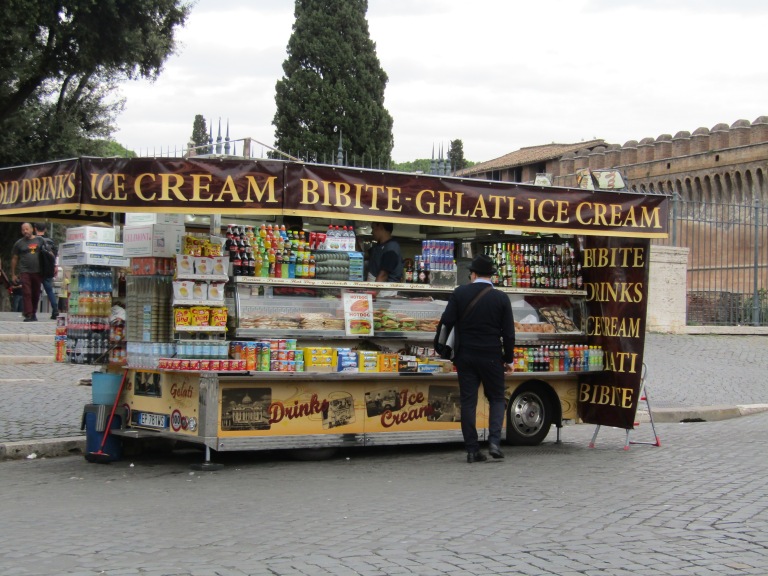 Also take plenty of hand wipes – plus a sun hat, and a sun umbrella (a mini umbrella is easy to carry round). Shorts and bare chests and shoulders are not permitted inside churches – and bare chests are also frowned upon generally, so wear a lightweight shirt and take a lightweight scarf or wrap you can carry if you don’t want to walk round the Vatican in a sheet of plastic provided for you!

Rome is such a wonderful place to visit at any time of year – I generally visit in spring or autumn, when it is less crowded and can still be very warm. But if you are setting off on a break this July, have a wonderful time!

All images copyright A. Meredith except where stated

Join unhappy housewife Bee and newly-divorced Alzheimer’s specialist Dr Neil McCarthy as they embark on separate weekend breaks to the Eternal City to try and put marital woes behind them. What happens in Rome will change their lives forever.

The story continues in VERONA ALONE and VERONA AGAIN, when newly divorced professional cellist Moira sets off to Verona for her first post-divorce solo holiday. There she meets a quirky American who takes her under his wing, but he is not all he seems – and Moira suddenly finds herself all at sea and in deep water.

The series is available to download free at Kindle Unlimited or for £2.40 each.

Note all the novels have sexual content and adult themes.