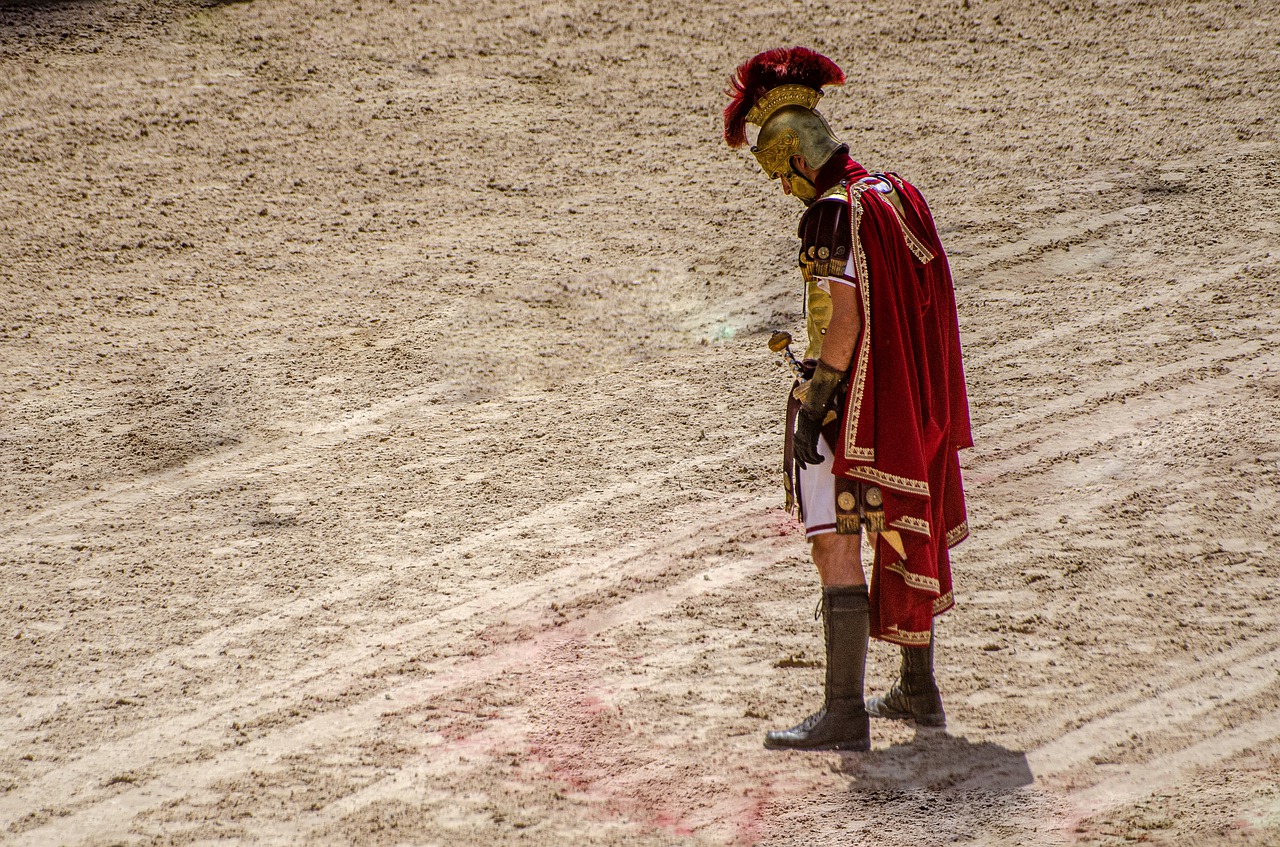 Ancient Romans just pipped Britannia to the post in Euro 2020 – but the omens may not be good for opponents of the Ancient Britons in next year’s World Cup. Just like Caesar, Britannia could well return a year later and conquer all.

Julius Caesar first arrived on the coast of Britain in 54 BC. He brought with him a couple of legions and headed off to London, but got no farther than Kent, thanks to fierce opposition from the Ancient Britons.

This was Julius Caesar – the most famous Roman general, who thought nothing of donning his red paludamentum (his general’s military cloak) and riding to the front of his troops in battle when things were not going his way.

The troops serving under him would also have worn red – capes known as sagums – and red became the colour for military uniforms during Roman times.

In 55 BC, Caesar returned to the shores of Ancient Briton with five legions of troops – and this time he triumphed, making it to London and installing Roman rule across the kingdom he called Britannia, adding it to the Roman Republic.

It is a salutary lesson that even the most successful men in history often had to have more than one stab at achieving their goals.

Britannia went on to thrive – by the time Emperor Hadrian (117-138 AD) arrived, there were African troops stationed in the north of England and the empire spread not only to Africa but also the Middle East. Hadrian had himself been born outside Rome – in Spain, at a Roman settlement called Italica, just 9kms outside Seville, where the Emperor Trajan was also born.

The Roman Empire lasted for around 400 years, with Emperor Augustus first taking the title emperor in 27 BC, after the assassination of Julius Caesar in 44 BC.

The Romans were great believers in Fatum – fate. The word is derived from the Latin “to speak”. Julius Caesar met his death after his third wife Calpurnia begged him not to attend the meeting at the senate where he was murdered because she had been awake most of the night with terrible nightmares, which she correctly thought were a bad omen.

The Romans were extremely superstitious, including Caesar, but perhaps not quite so much that he would alter course completely- or be put off by obstacles in his way, or even failure. Often in Roman life, fate was a question of timing – if the portents did not look good, they would delay an action or a campaign and wait for more favourable omens. If they failed, they might wait for the next favourable period in which to take action, or take heed of the warnings of the oracle – but perhaps not their wives.

People still argue about who was the most successful Roman general or emperor to this day – but there is no doubt that the most famous and revered Roman leader is Julius Caesar, despite the fact that he, like anyone else, had his failures.

In the end, he actually lost his life because he became overconfident, wishing to install himself as a demi-god and ruler in perpetuity – and claiming descent from the mythical founder of Rome, Aeneas, whose mother was the goddess Venus. Had there been social media channels available during his lifetime, you can imagine the content on Julius Caesar’s.

Next year’s World Cup may see another re-match between the Ancient Romans and the Ancient Britons, both of whom share common ancestry with the Romans, as well as the Celts and Visigoths. It is little wonder it was such a close-fought battle in Euro 2020, with the wily old Ancient Romans just nipping their younger opponents in the bud over penalties.

But like Caesar, another year could make all the difference – if Caesar can come back stronger and more determined a year later, so can Britannia.

Even more of an omen is the fact that when Caesar and his troops were not wearing red capes in battle, they were most likely dressed in a white toga for daily life – the two colours of the England strip. Calpurnia really would be up all night over that.

Sadly for the Ancient Britons, Rome was not quite built in a day at Euro 2020 this year – but just as it was for Caesar in 55 BC, next year for Britannia might be very different.

All images Wikipedia CCL, except where stated