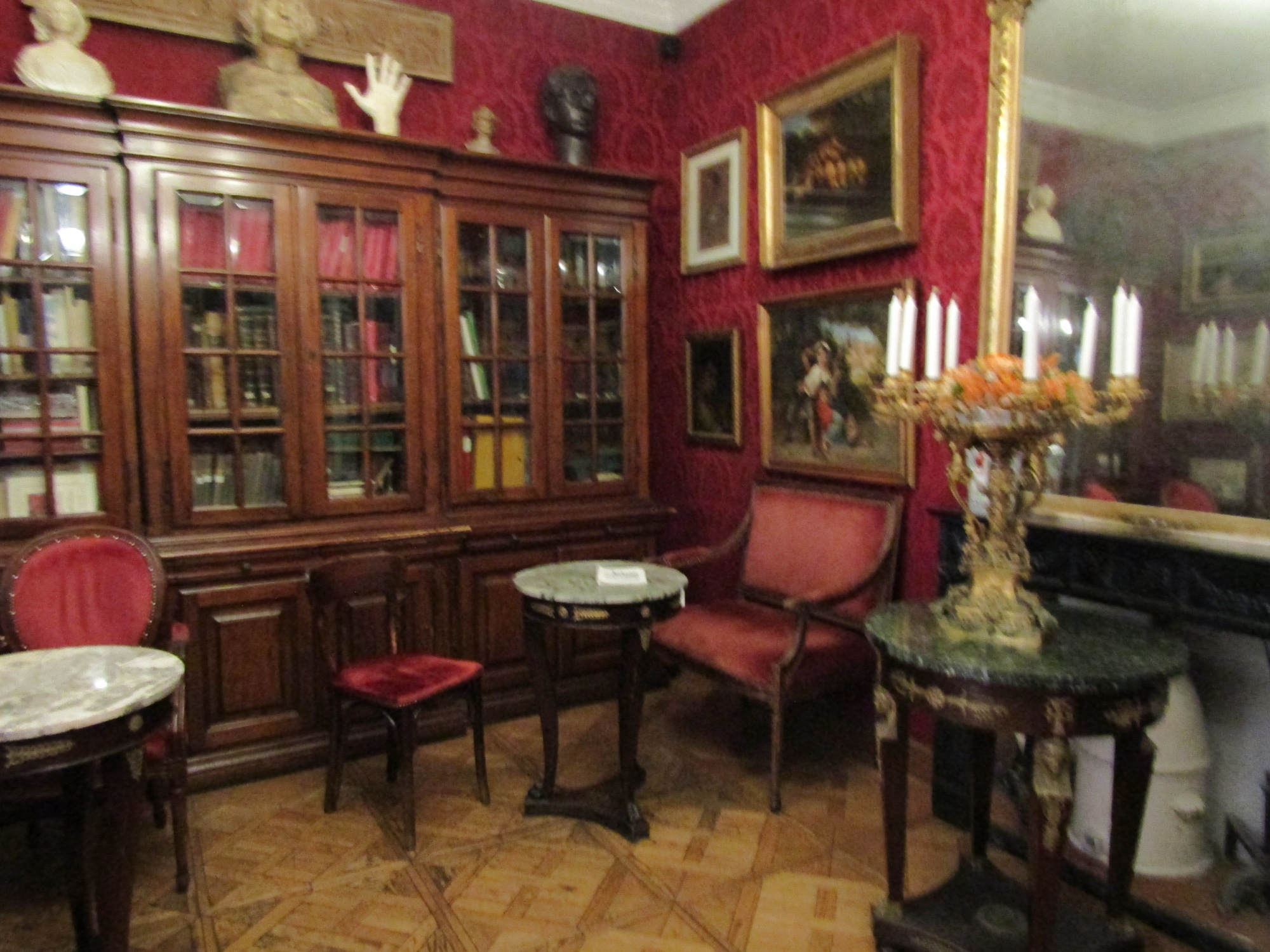 Now the winter weather has set in, there is nothing better than sitting in a cosy café sipping coffee and feeling snug. We may not be able to do that as much as we used to, but if you need a trip to a cosy café with atmosphere, enjoy this virtual trip with me to Caffè Greco in Rome!

Via Condotti is known for its luxury brand stores – but centuries ago it was known for something else: the infamous Caffè Greco, where poets like Lord Byron took their morning coffee, among other more debauched past-times.

Today Caffè Greco is a model of propriety, full of uniformed waiters and a stern Maître D who makes sure everything is shipshape and done properly.

Unlike Babingtons Tea Room by the Spanish Steps, Caffè Greco is  bastion of formality as soon as you enter via the splendid patisserie and chocolate shop, where you can buy delicate china embossed with the Caffè Greco logo for a small fortune (gold edged, you see).

I settled for a tin of Caffè Greco mints and caused a ripple of disdain among the staff. Never mind – the 20 euro note I flourished seemed reassure them I was not fresh off easyJet and looking for a bargain.

The cafe is a period delight – not only are their uniformed waiters and waitresses forever silently cross-crossing the ancient floor between original wooden banquettes where poets lounged, there is a glass-roofed room painted eau-de-nil, which was closed when I visited because, looking up, you will see thin air between the archaic beams and panes of glass; where no doubt the rain drips forlornly on velvet knickerbockered poets these days.

But it is sublime, the walls adorned with paintings, the banquettes suitably ancient and worn by famous and infamous buttocks. Sadly staff and customers appear oblivious to its wonders, even though I am skipping about with my nose pressed up against picture frames like Alice in Wonderland.

I was not approached by a staff member or shown to a table, so wove my way between the earnest patrons scanning their laptops, reading real books and looking respectfully serious about their surroundings, even when presented with surely one of the most sumptuous cakes you could possibly wish for. The accepted mode is to not raise an eyebrow, not smile, not speak to the waiters – or seem at all interested in the original artworks on the walls, let alone take a selfie.

To hell with that – I had euros to burn and I did it all with the zeal of an America tourist fresh off the plane from Arkansas, who has only just left the US of A for the first time in their life. I wish I had thought of strapping my camera to my chest before entering – and donning a pair of pants with an elasticated waistband to prepare myself for the patisserie fun ahead.

I made my way to the rear salon of the cafe, where there is a drawing room bordered by old bookcases full of leather-bound books, a wonderful parquet floor which reminded me of school – and an ancient Satyr, which I was informed was an original statue, but which to my (un)educated eye looked like a plaster copy.

I ordered a fabulous cake and a latte macchiato and sat in splendour alone, waiting for a poet to drift by and take a seat, his head full of rhymes and rhythms.

Then through the rear doors which open onto a narrow street, I heard shouting – and broke all forms of etiquette to enquire of the waiter what it might be (my voice suitably tremulous, as I was, dear reader, after all, a woman alone in Rome).

There was a football match that evening, I was told – and trouble was anticipated. It might be necessary to close the doors to prevent infiltration by customers wearing the Lazio strip. At this point two men wearing the Lazio strip walked in and padded past behind the waiter into the main salon, seeking refreshment.

I didn’t raise the alarm because, unexpectedly, on revealing I lived in the same borough as Arsenal FC in the UK, the waiter and I struck up a conversation about London, where he had trained and which he obviously loved, being a young man and given to pleasure-seeking perhaps; which, ironically, Caffè Greco used to be known for, also – but more of that later.

Sadly our conversation was brought to a sudden end by a pole-thin Maitre D, who summoned my waiter over, spoke to him at length in Italian and then dismissed him from my dangerous presence, never to be seen again. I turned my attention to my cake – a confection of delicate Genoese sponge and Chantilly cream sitting on a doily. I took a photo of it, naturally.

Soon, I was joined by two plump priests and a young couple whom, it transpired, were planning their wedding and were possibly from Arkansas, but more likely from The Hamptons. While the priests spoke gravely of some ecclesiastical matter, the young couple held hands across the table – only to remove them suddenly when the Maître D slithered back into the book-clad room and hovered, eyeing me suspiciously as if I might be one of those women who takes a Grand Tour to the Eternal City with a view to finding a young husband; or worse, refuses to marry the poor fellow and simply ruins him and any future he might have. 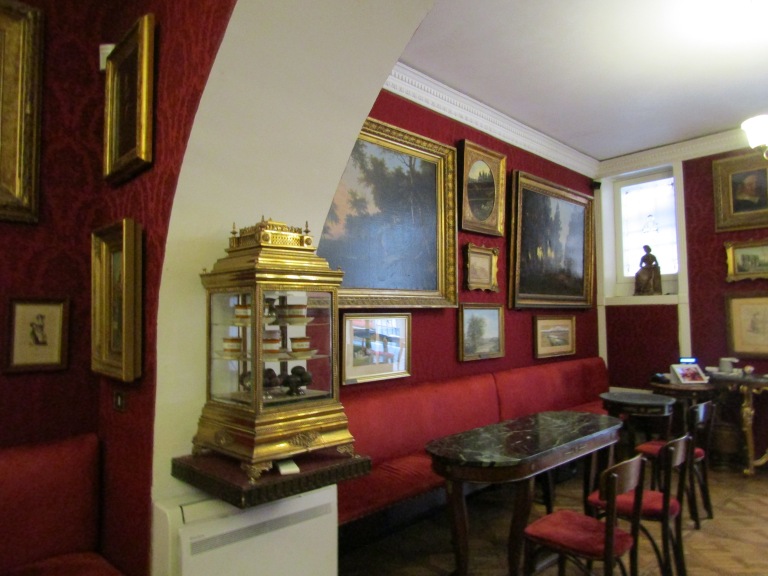 Saved by the bill

However, it was at this point that the young couple did something truly wonderful – they broke the spell. The exuberant wedding plans had somehow reached the potential bill for bridal flowers, while the rest of us had been shimmying round the delicate matter of how two priests, a lone female and a plaster Satyr with its legs akimbo could be accommodated within the necessary proprieties of morning coffee on the Via Condotti in Rome.

The bridegroom-to-be suddenly forgot himself and shouted “F*ck!” at the prospect of handing over his entire annual stipend from his oil baron dad to pay for the bridal posies.

In an instant, all formality was forgotten, despite his profuse and sincere apologies – and the spirit of Lord Byron was resurrected as surely as an eternal flame that has almost been extinguished, but which is suddenly reincarnated with avengeance.

We could all breathe a sigh of relief, kick off our shoes and relax – priests included, who thereafter became quite cheerful and boisterous, as we all did.

The Antico Caffè Greco opened on Via Condotti in 1760 and was the place du jour for anyone and everyone with  half a brain who visited Rome: Byron, Keats (despite TB); Goethe, Ibsen, Hans Christian Andersen, Schopenhauer, Liszt, Wagner – and yes, Casanova – all sat themselves down on a velvet banquette or hard-bottomed wooden library chair and contemplated life over an aperitif or strong coffee at Caffè Greco, overseen by a large grinning Satyr, a grand piano and original works of art.

It is Rome’s oldest cafe and in recent years has suffered the same fate as lesser mortals – an exorbitant rent  rise which nearly led to its closure, so no wonder the Maître D looks stern.

Antico Caffè Greco is a delight, though – it does not have the warm, friendly appeal of Babingtons, where the daintily clad staff are chatty and indulgent of tiresome tourists, prying into every corner, taking photos of the cakes and spending a small fortune on Babington’s tea, which has to be weighed out and tucked into individual pouches for each customer.

But Caffè Greco is is Italy’s second oldest cafe after Caffè Florian in Venice – and if you can penetrate the cool formality and get to the bottom of its longevity, it will surprise and delight you.

I especially like the painting which suggests Caffè Greco has a history somewhat more colourful than as a place of repose for deep thinkers – with brightly clad ladies throwing their ample bosoms round the necks of gentleman coffee-takers circa 1800. A different kind of sweet tart with your morning coffee.

Today, marketing tactics include not only the lovely cakes and chocolates and delicate, gilt-edge china souvenirs – but an elderly gentleman in straw hat and red coat who paints  original watercolours by the till where I flourished my 20-euro note as if to the manner (or manor) born.

Oh, and the ladies’ room is gorgeous, too. Naturally, I took a photo – and got caught doing it by a disapproving attendant.

But when in Rome, as the saying goes.

So do I love Caffè Greco as much as I love Babingtons?

To me, Babingtons is like walking into the warm embrace of a loving husband, who welcomes you home time and time again and treats you like a princess.

Caffè Greco, however, is like a handsome, chilly lover whose heart you have to win and whom you have to humour – and I do so like a challenge, a nice cake and a leather-bound library book.