This year is the Jubilee of Mercy in Rome and on Wednesday the relics of St Pio and St Leopold were brought the city for a procession to the Vatican – and audience with the Pope for the faithful – on Friday 5 February. The relics will remain in the city until 11 February, the day after Ash Wednesday on 10 February.

In the Christian calendar, Ash Wednesday is a day of fasting and falls 46 days before Easter, when Christ will be resurrected according to Christian beliefs.

Whatever your religious persuasion – or not – religious observance is intrinsic to Rome as centre of the Catholic faith. If you visit the Eternal City during Easter when there is a public audience with the Pope in St Peter’s Square, it is hard not to get caught up in the spirit of the occasion and the excitement.

St Peter’s Square is not a stuffy place to visit at any time, however – yes, you must be respectful and especially inside the basilica, but among the crowds that gather outside there is almost a hippy vibe. Unless there is an audience or ceremony, there are no seats and so most people gather at the centre of the piazza round the base of the giant pylon, and rest their feet sitting on the cobblestones or by perching on the railings if there is a spot empty – including nuns, pilgrims, tourists young and old and families. There is a very inclusive feel to St Peter’s Square – children usually climb all over the base of the central obelisk brought to Rome by Caligula. The Emperor Nero used the pylon –which came from Heliopolis – as a turning point for charioteers during races, when the site was Nero’s stadium. Today’s children are putting it to good use as a climbing frame while their parents and grandparents take a welcome break from sightseeing.

St Peter’s was first built in the 5th century to house the chains of St Peter after he was imprisoned at Mamertino. Bernini designed Piazza San Pietro as we know it – and after several false starts, Michelangelo simplified the earlier plans of Bramante in the design of the current Basilica of St Peter’s, where the saint’s remains are entombed. Sadly, Michelangelo did not live to see the church completed.

The architecture and symbols are subject to many different theories, including conspiracy theories about the use and meaning of certain symbols, some of which I shall write about in other posts.

When in residence, the Pope –Il Papa – always addresses the crowds at noon on Sunday.

On Friday, 5 February there will be a special address to the faithful and followers of St Pio and St Leopold, with exposition of the relics for veneration by the crowd. Rome is expecting at least 50,000 people to attend.

Even if religion is not important to you, there is a spirit and an energy when crowds of believers gather to observe any religious ceremony, regardless of the faith – communal experience is what helps bond us to our fellow man, even if the specifics of a faith are not always familiar to us.

But simply standing in St Peter’s Square in the sunshine and people watching is an experience in itself, regardless of what you believe. 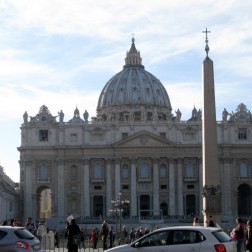 Everyone is welcome in St Peter’s Square

Refreshments are on hand