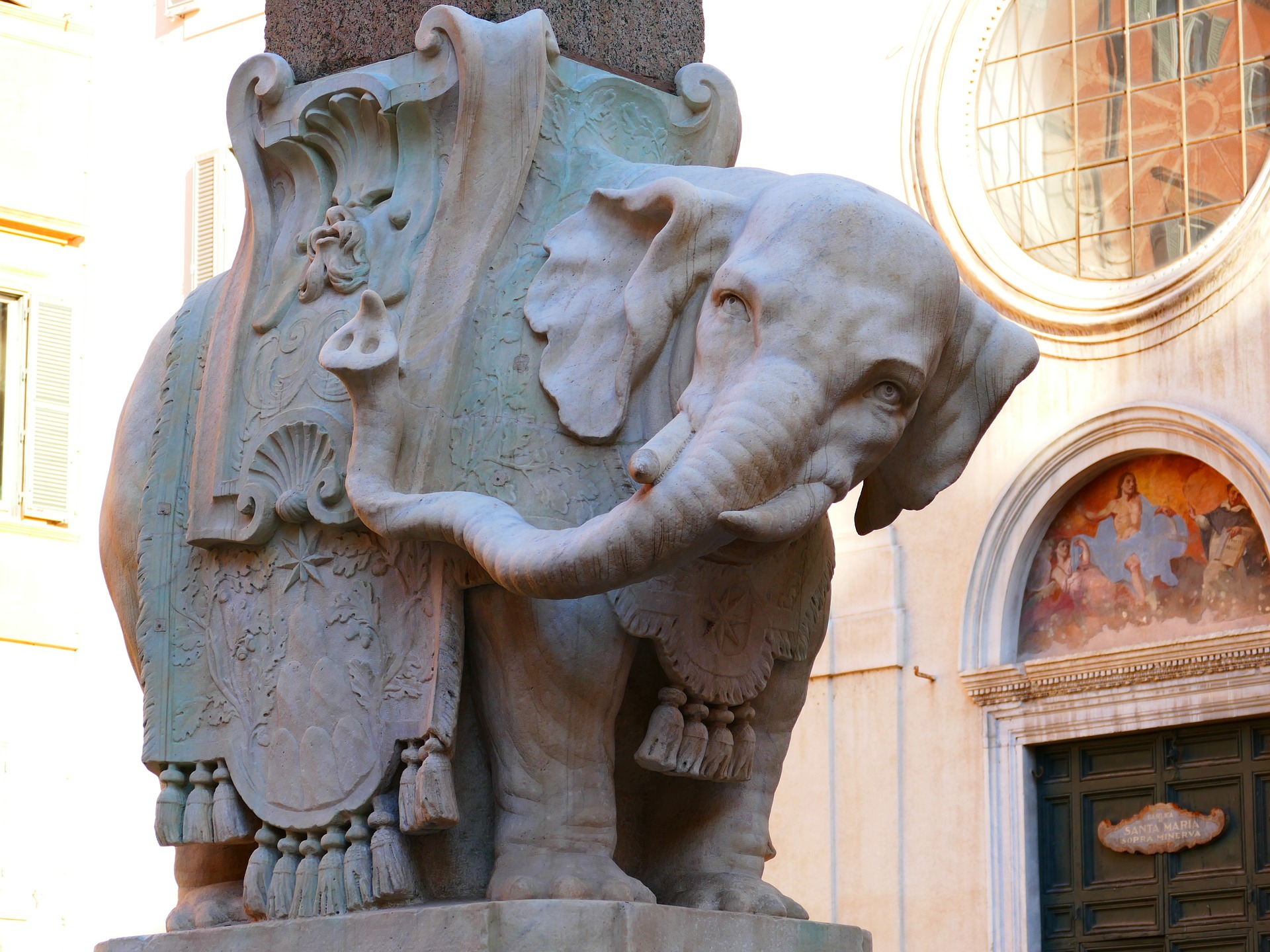 In the centre of Piazza della Minerva in Rome stands what many may feel is an oddity in the Eternal City – an elephant carrying an Egyptian obelisk on its back.

Piazza della Minerva stands behind the Pantheon, where Raphael is buried, and the square is the lowest point in Rome, so was prone to flooding. On one wall is a commemoration of the Tiber flooding in the fifteenth and sixteenth centuries, next to the church of Santa Maria sopra Minerva which is located in the piazza.

The statue of the elephant is thought to have come about when Pope Alexander VII wanted to display an Egyptian obelisk which had been discovered in Rome circa 1660. Egyptian pylons were often brought to Ancient Rome as the spoils of war or even as gifts. Remember how the Egyptian Queen Cleopatra influenced Rome’s history – and even stayed in Rome during her affair with Julius Caesar.

The Italian artist Bernini was commissioned to design a display for the obelisk and it is possible the idea for the elephant was based on an earlier drawing he made – and was perhaps influenced by drawings in a fifteenth century romance called the  Hypnerotomachia Polyphili.

Elephants in Ancient Egypt had become extinct by 2600BC, but it is thought they might have been used in wars in later periods. The Carthaginian general Hannibal reputedly crossed the Alps on elephants in the Punic Wars in 218BC.

The little elephant in Piazza della Minerva is now one of the best loved statues in Rome – although it was vandalised in 2016, when a tusk was broken off. It is much loved by locals and tourists, though, who flock round it for photo opportunities – and it is one of the sights in Rome that instantly appeals to children.

If you buy a gelato and sit at the rear of the Pantheon on the low wall there, you can enjoy a view of the elephant without being trampled underfoot by selfie takers.

Bernini himself may not have actually sculpted the elephant – it is possible his assistant did the actual work – but there is evidence in the Vatican library that he adjusted its facial expression to be more benign rather than fierce and altered the direction the elephant was facing.

The statue was unveiled in February 1667 – meaning this month the little elephant celebrates its 351st birthday.

Pope Alexander VII died the same year it was unveiled, leaving us one of the most pleasing statues in the whole of Rome. Job done.

Set off to the Eternal City for a weekend of surprises in ROME ALONE, as unhappy housewife Bee and newly-divorced Alzheimer’s expert Dr Neil McCarthy leave from opposite ends of the country for a mini-break full of the unexpected that will change their lives forever. Return to Rome with them three years later in ROME AGAIN and discover the forces at work which they never suspected on their first trip.

Catch up with the story in VERONA ALONE, free at Kindle Unlimited or for just £2.60 each.