Trajan’s Market is one site visitors to Rome will inevitably pass, as it lies at the top of Via Dei Fiori Imperiali, round the corner from the Vittorio Emanuele II Monument.

The market is also marked by Trajan’s Column.

It is though that Emperor Trajan commissioned the architect Apollodorus of Damascus in 100AD – and the market was finally opened in 113 AD.

The structure has a curved facade and was originally two storeys high. It was also a covered market, making it the first shopping mall ever! Inside the market was a point where wheat was handed out free to Rome’s citizens.

There were approximately 150 shops and residences in the market, which was constructed from red brick and cement.

The Romans were adept at developing building materials and techniques, and were famous for their cement – Roman cement was known as opus caementicium. The Romans also invented tufo – a long-lasting cement with a binding agent.

Both the Colosseum – situated at the other end of Via Dei Fiori Imperiali – and the Baths of Caracalla are constructed using Roman cement, which is the reason they have survived for so long.

A further four storeys were added to the original two storeys of Trajan’s Market in the Middle Ages – along with a tower called the Torre Delle Milizie (Tower of the Militia). The tower is 50 metres high and is also known as Nero’s Tower. 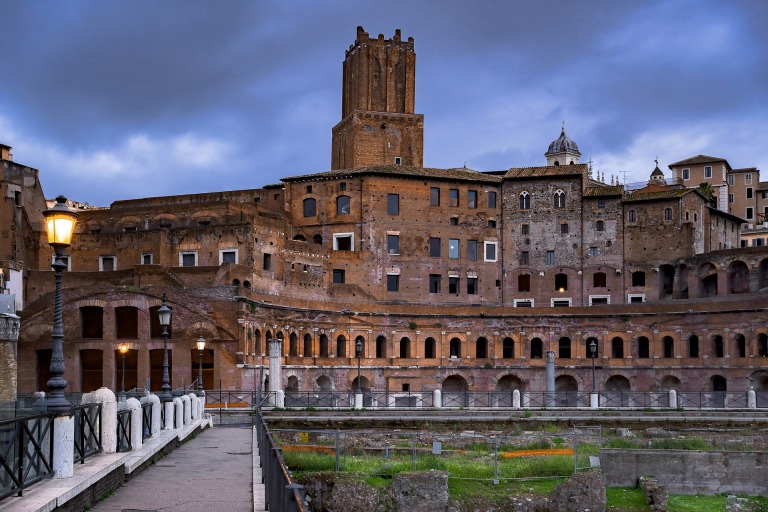 The entrance to Trajan’s Market is at Via IV Novembre, 94 and it is an interesting place to visit.

In 2007, the Museo dei Fiori Imperiali opened nearby, housing many artefacts from Trajan’s Market and the Forum.

The sites in Rome are illuminated at night – including Trajan’s Column and Trajan’s Forum, which look spectacular.

To enjoy ancient Rome at night, you can either take a guided Night Tour of Rome, or simply wander round the sites at leisure after dinner.

Download the ROME ALONE series at Amazon Kindle and set off for the Eternal City from the comfort of your sofa or sun lounger!

Download the ROME ALONE series free at Amazon Unlimited or for £2.40 each.