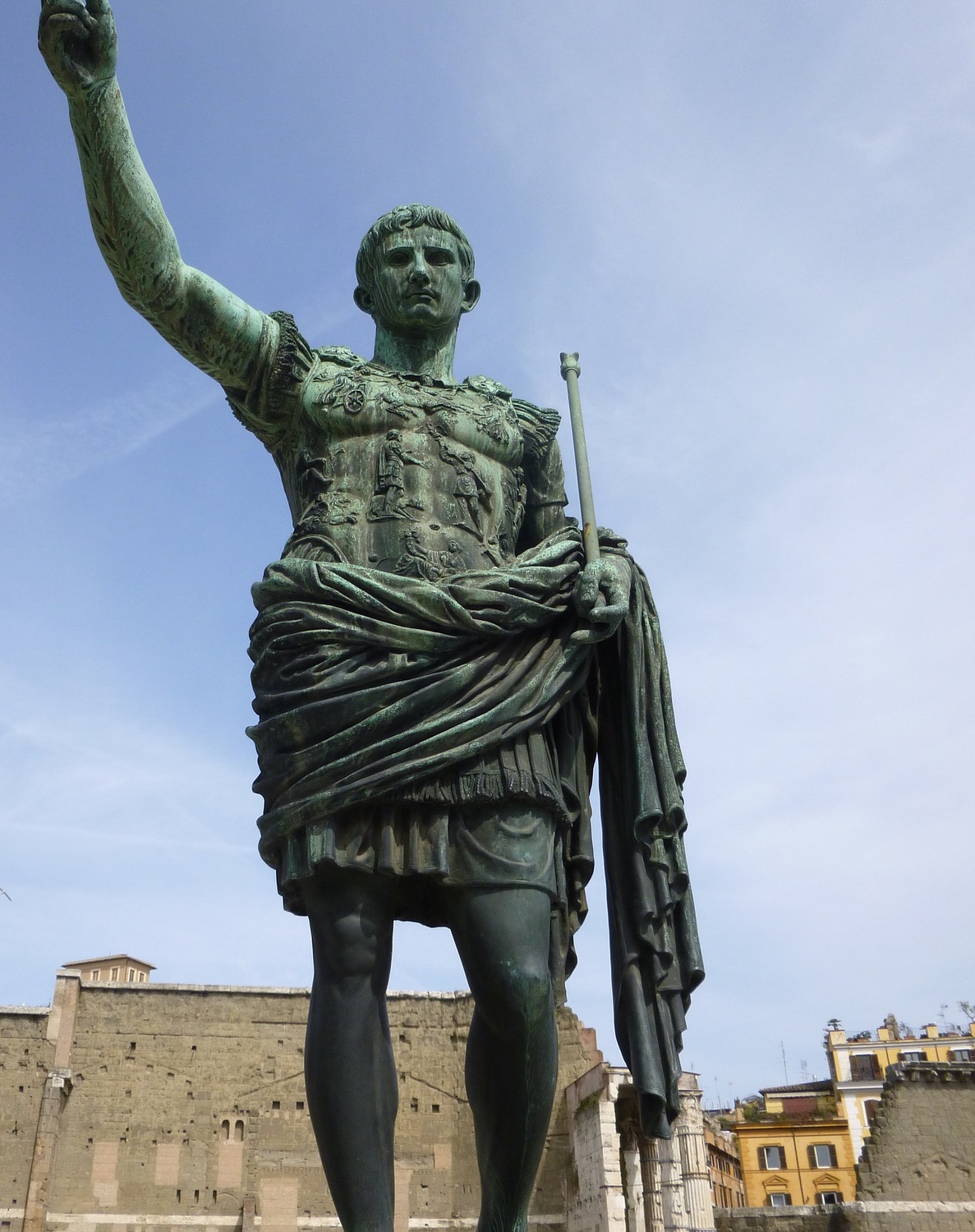 We often think of Julius Caesar as an emperor, but in truth his great nephew and adopted son, Gaius Octavius, became first emperor of the Roman Empire after Caesar’s assassination in 44 BC. 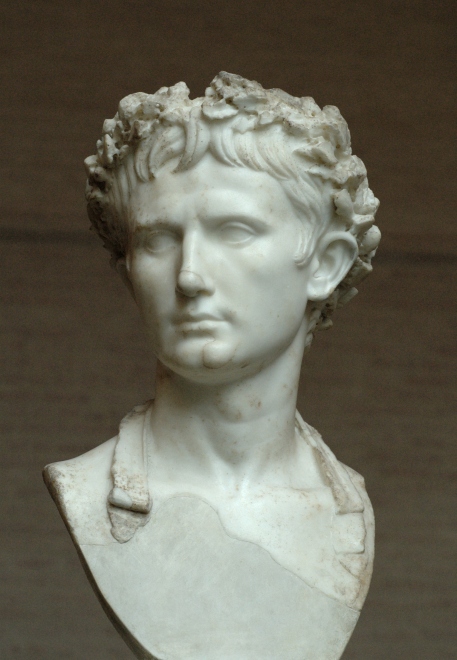 The making of a Roman Emperor

Octavius was born to a wealthy family and joined the military. He was undergoing training when he heard of his adoptive father’s assassination and his succession as emperor.

His first job was to form the Second Triumvirate with two of the most powerful men in Rome – Mark Antony and Lepidus, both generals and statesmen. Together they took revenge on the murderers of Caesar – and Augustus built a temple to his adopted father, the remains of which can still be seen in the Forum and which is now a shrine where visitors leave coins and flowers.

Augustus extended the Roman Empire greatly, famously annexing Egypt and bringing about the downfall of its Queen, Cleopatra, and her lover, Mark Antony.

He is the first of five emperors of the Julio-Claudian dynasty of Roman emperors – the name is an amalgamation of the two main branches of the families the emperors descended from, the Julii Caesares and the Claudii Nerones.

The four other emperors were Tiberius, Caligula, Claudius and Nero.

An emperor by any other name

Augustus actually had several different names – a habit among the Romans, who often were named after family members or adopted their names, making working out who is who tricky at times. He is also known as Gaius Octavius Thurinus, which he was given as a toddler – and also took his adoptive father’s name and was known as Gaius Octavius Caesar.

Names were often changed or added to, or titles adopted to mark events or even victories – so Augustus also became known as Gaius Julius Caesar Divi Filius after his adoption (Gaius Julius Caesar, son of the divine).

It was, of course, Caesar’s ambition to become divine and rule in perpetuity – and even be seen as a demi-god – that got him murdered by rival senators.

Caesar claimed to be a descendant of Venus through his ancestor Aeneas, the mythological Trojan prince and hero of Virgil’s epic poem The Aeneid, who was the founder of Rome and the son of Venus and the mortal Anchises.  Romulus and Remus were also descendants of Aeneas and so by claiming this lineage, Caesar was establishing himself and his dynasty as the rightful rulers of Rome and the Roman Empire.

As his named successor, Augustus also became part of this legacy.

Augustus ruled until AD 14, when he died at the age of 75. It is suggested that his third wife Livia may have poisoned him.

Their marriage was a scandal from the start, although she went on to become his adviser and he adopted her son and named him as his successor.

However, Augustus was still married to his second wife Scribonia when he met and fell in love with Livia, who was pregnant with a second child at the time.  This did not deter him. Augustus divorced Scribonia in October AD 39 – conveniently on the day she gave birth to his daughter, Julia the Elder – and married Livia on  17 January AD 40, three days after she gave birth to her second son, Nero. It was a very rock and roll marriage, with all the usual etiquette surrounding betrothal ignored.

Livia’s sons, Tiberius and Nero, both became emperors of the Julio-Claudian dynasty, in the absence of Augustus having any direct male heirs.

The Succession Question in Ancient Rome

There was a marked lack of direct male heirs within the dynasty and so often nephews or grandsons – or even adopted sons – were named as successors. Caligula was Augustus’ great-grandson – the son of his grand-daughter Agrippina the Elder, who was the daughter of Julia the Elder.  The term “Elder” often denoted the mother of a daughter with the same name. 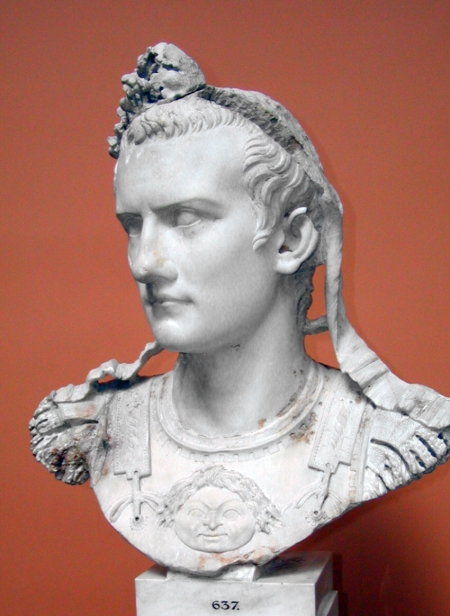 Augustus is commemorated all over the Roman Empire, from Rome to Rimini, Barcelona and beyond – in Ankara, Turkey, there is the Temple of Augustus and Rome.

In Rome itself, the main monuments to Augustus are the Temple of Divus Augustus  (Roman Forum, exact site not known), The House of Augustus, The Ara Pacis – and the Mausoleum of Augustus, which opened to the public this year.

August – and why not?

The month of August is named after Emperor Augustus – it used to be the sixth month of the Roman year, which began in March. After Caesar’s death, the fifth month (Quintilis) was renamed Iulius (July) in his honour. When he became emperor, Augustus renamed the sixth month (Sextillia) after himself.

And why not? It is a wicked month, after all.

You can see a video of the restoration of the Mausoleum of Augustus on YouTube.

You can visit the mausoleum and Ara Pacis Augustae together, as they are situated near to each other. Head for the Lungotevere – you can walk straight there from the Spanish Steps if you take Via Condotti.

The House of Augustus is situated in the Forum, on the Palatine Hill. 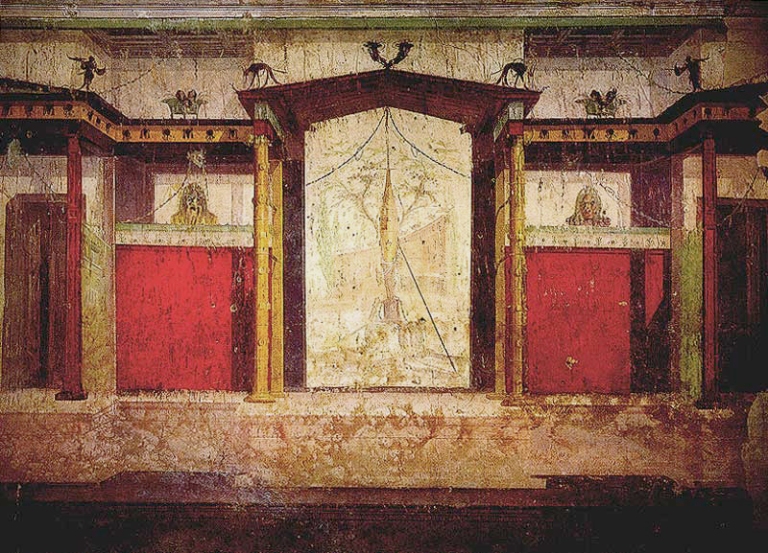