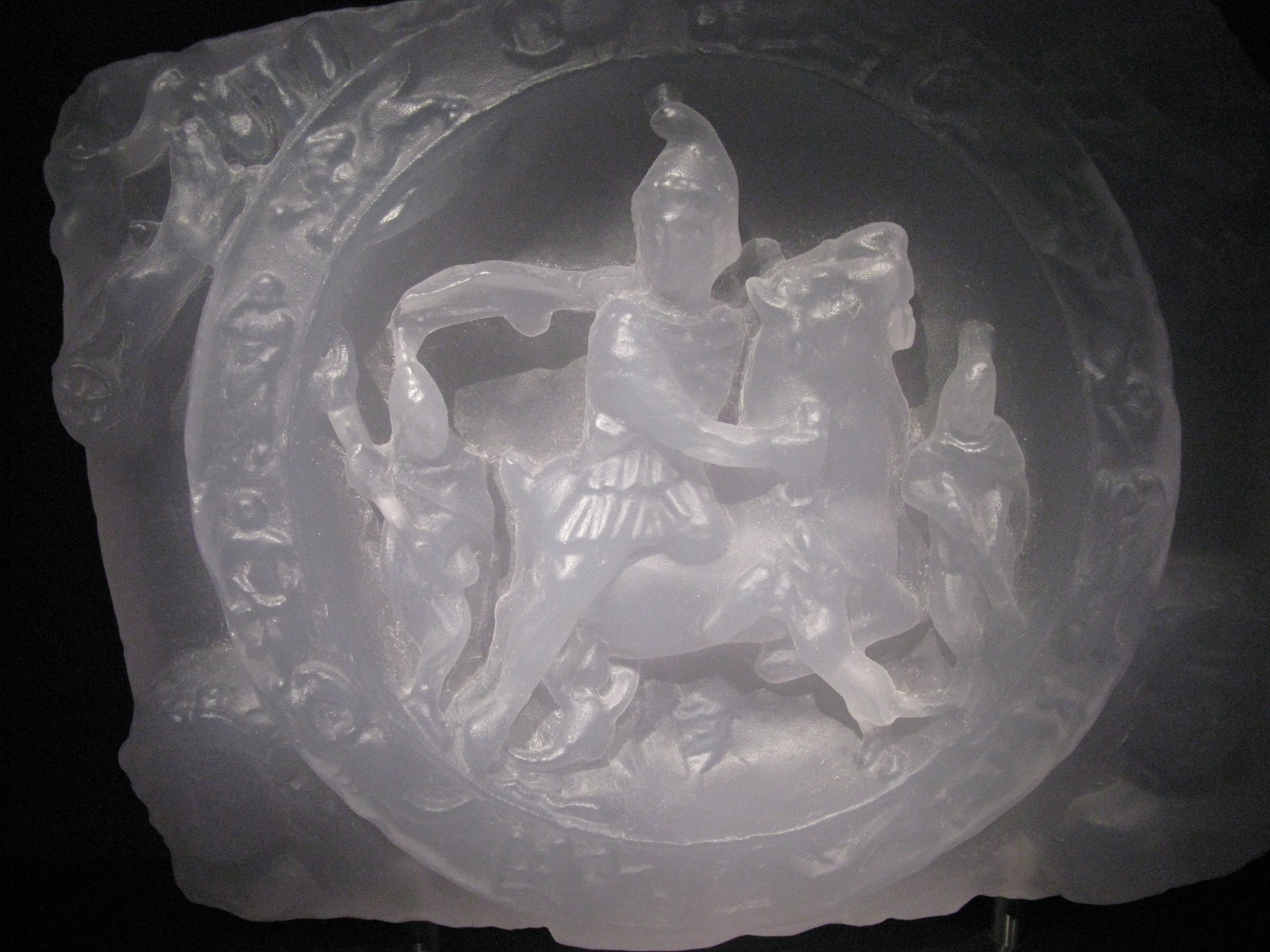 A recent comment on my blog on the Arch of Constantine in Rome’s Forum has prompted me to blog about the Mithraeum found beneath the City of London, which has now been restored and opened to the public. If you are interested in Roman history but cannot visit the Mithraeum in person, here are some highlights.

What do we know about Mithras?

Mithras was a Roman god worshipped by an all-male sect which had a strict hierarchy of membership, including various stages of initiation.

At the centre of the cult was a bull, which is thought to represent the constellation of Taurus – astrological signs were important to the cult.  The images below explain the other symbols which occur in the worship of Mithras. 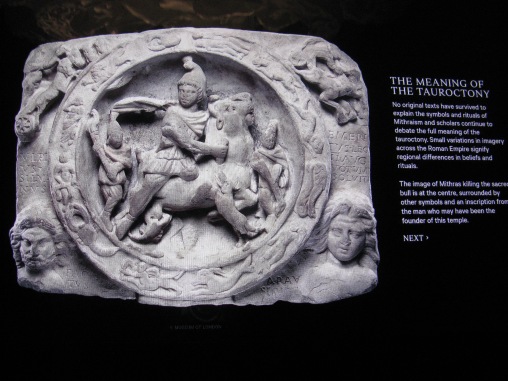 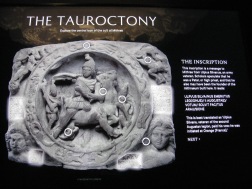 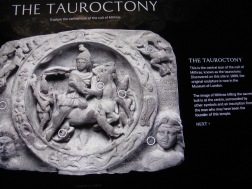 The Emperor Constantine – who is credited as the first Roman emperor to embrace Christianity – was a follower of Mithras. The Romans worshipped many different gods and also adopted gods from Greek mythology and renamed them. Romans did not subscribe to monotheism – worship of one god – but had different gods for different purposes in their lives. Mithraism – the worship of Mithras – was practised in the Roman Empire in the later centuries between the first and the fourth century AD.

The cult of Mithraism is still being uncovered, but the imagery of the god Mithras killing a bull – an act known as tauroctony – is central to the cult. There is debate over why bull-slaying is central to the belief system, but Mithras is also depicted with other gods, such as Sol, the Roman sun god. The tauroctony image also usually features a scorpion attacking the bull’s genitals, as well as a dog attacking the bull, a snake and a wheatsheaf. The sun and the moon (Sol and Luna) also appear at the top of the image. The slaughter of the bull is thought to symbolise strength, fertility and rebirth.

Mithraic temples were always built near water so it is thought that fresh water was needed for rituals, as temples to Mithras also contain a basin. The Mithraeum in London was built near the subterranean River Fleet. It was also thought that incense was used, given relics found on the sites.

Mithras and other religions

Mitra is a god in Persian culture – and Mithras often wears a cap which is Persian in style.

Some commentators say that Mithras was the god who guided souls from earthly life back to the light from where they came. The cult also centred on feasting and banquets, and when Mithras dines with Sol in images, it is the slaughtered bull they feast on.

The sun god Ra is also central to Egyptian beliefs – the ancient Egyptians also worshipped different gods and new cults sprung up, including the cult of Isis, also thought to date from the same time as Mithraism. Among Ancient Egyptian gods, there is also the figure of Anubis – who is depicted as a dog or jackal or a man with a canine head. He is connected to embalming and the afterlife. The dog in the tauroctony images is often depicted attacking the bull’s throat during the slaughter.

It is thought that the rise of Christianity ended the popularity of Mithraism – although some historians believe that Mithraism and Christianity are opposite sides of the same coin, with similarities such as Mithras and Jesus both being born on 25 December (often the subject of debate) and the fact that there is evidence followers of Mithras may have been marked with the sign of the cross on their foreheads, as in Catholicism. The snake in the garden of Eden also echoes the snake image in the Mithraic tauroctony.

Religions frequently have similarities and share gods or prophets – Jesus and Abraham (Ibrahim إِبْـرَا) are prophets in both Christianity and Islam, for example.

It is thought Mithraism also had followers among the ancient Greeks – the Romans had their own versions of Greek gods, such as Venus for the Greek goddess of love and beauty, Aphrodite. 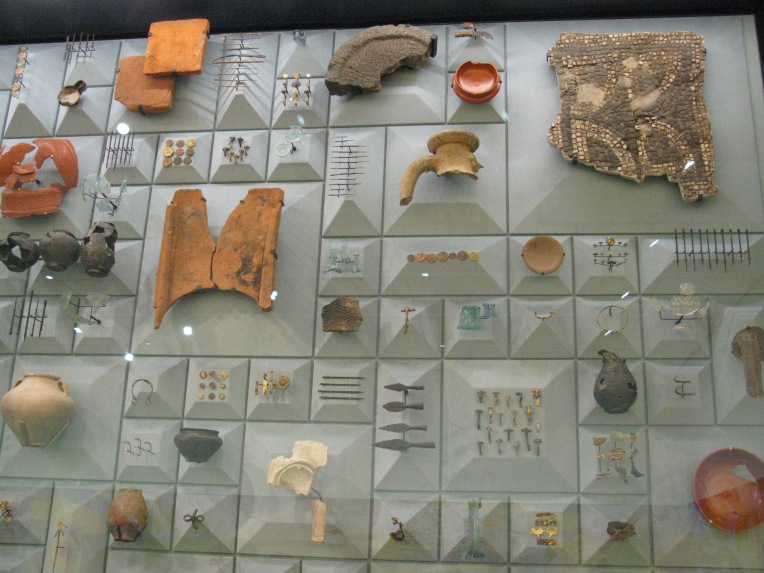 Artefacts found on the temple site

As often happens with new religions, Christianity took over sites which were dedicated to Mithraism, including the Basilica of San Clemente in Rome, beneath which the ruins of a Mithraic temple can be found.

Temples to Mithras were established in public buildings rather than homes, so although it was a private belief system rather than a state belief system, there appears to have been a communal spirit among the men who worshipped Mithras – who might have been businessmen, soldiers, merchants or members of the ruling elite.

The Mithraeum in London is in the heart of the City of London, which would have been at the centre of trade in the ancient city.

If you are visiting London, the temple is near Bank, St Paul’s and Mansion House tube stations.

The Mithraeum is beneath Bloomberg’s offices – you can book tickets and find more information here. There is also a teachers’ resource online. 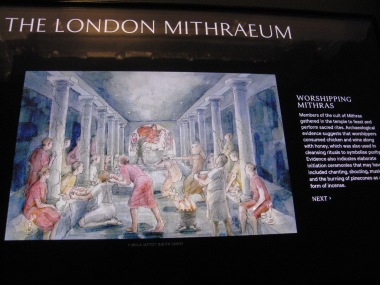 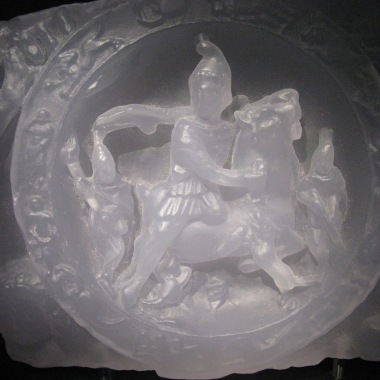 All images copyright A. Meredith 2018